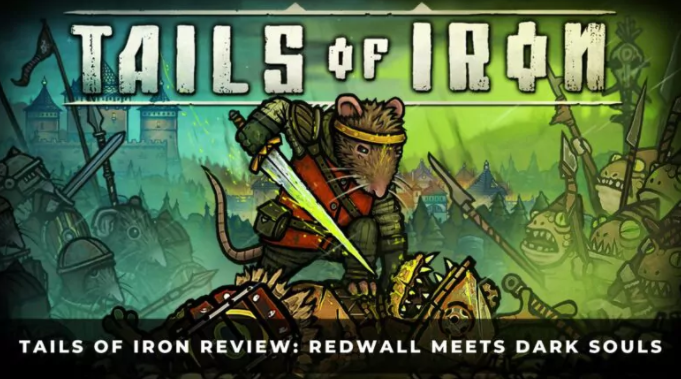 Tails of Iron, a 2-D souls-like, an indie game developed by Odd Bug Studio, and published by United Label, CI Games, is my latest obsession. This game was recommended to me by a frienIt’st’s magical to see tiny creatures trying to survive in a big world. I take this idea and create a Redwall-Esque medieval society. It is a story of a kingdom that has fallen apart, and it is both charming and dangerous. It might not be perfect, and it has some flaws. Bit’st’s a game I lovIt’st’s one tho “e “play it any “ay” caseLet’st’s talk about why…

STORY – THE RISE AND FALL of the Rat King

Tails of Iron starts with a brief history lesson. Since the beginning of time, the toads and rat people have been at war. King Rattus, who united all the kingdoms of rats under one rule, defeated the toad invasion. However, as all things do, King Rattus gets old and must choose a successor. Red is the minor son of King Rattus and is determined to be king. Your greatest ambition becomes a reality after defeating your brother in a tournament. You are now the king. The toads then invade, kill your father, and decimate your kingdom. You are left to pick up the pieces.

Most soul-likes reach a point where they begin to question why I do this. Why do I want to save a world whidoesn’tn’twhidoesn’tn’t want to be saved? I have a beautiful answer. Charm. Charm. All the adorable little rats are doing their best. Even the moles and toads in the last game have a certain charm. It was my heartfelt desire to save the world. This is not the only thing that sells, howeveIt’st’s excellent how the writing balances funny and dark with great creativity.

There are a few issues that I can see people experiencing. It is very short. It took me 7.5 hours to reach 85%, which might be a problem for Smits’s a great thing, however. The problem with most RPGs is how they expand tgame’se’s scope, which can lead to the player losing sight of their original goal. Tails of Iron offers a more focused experience without giving up the world-building that side quests may offer. Although the story could have been more profound and more consistent in tone, you will be able to experience the charm and creativity for yourself.

Tails of Iron, as I mentioned before, is soul-like. All the usual suspects are there. These checkpoints are in the form of benches that save the game and bring back the enemies. This flask, which is filled with bug juice, can replenish your health. Pattern learning fights with visual prompts that let you know what to expect. Yellow for parrying, red for dodging. There are light, heavy, and ranged attacks. You can also customize your build with enough equipment. You want to be a heavy armor rat and a spearman? You can do it.

Although it might seem dismissive, this is still a fun game. The attacks feel heavy, platforming works well and dodging is reliable. Although it can be difficult to stunlock multiple foes, it is usually manageable. The introduction of two-handed weapons was a great addition. They can both break through barriers and protect you in combat. The problem is that combat is 90% of the game and never changes. There are tons of weapons available, but the real challenge is learning how to attack and patterns.

Some fights feel trivial later in the game. There are many enemies to choose from, including warrior toads and feral bugs as well as a few other things. There are moments when certain enemy typshouldn’tn’ttypshouldn’tn’t be present. It feels repetitive to fight the big beetles in the final level if I have proven my ability to kill them over and over. Despite this, the game was fun. Ywon’tn’tYwon’tn’t feel bored by the kill animations and everything is designed to make you feel great. T “e “e “sy” difficulty is a little too easy, so I recommend normal or higher levels if you are looking for a challenge.

T “e “f” el” of a video game is where Audio and Visual design shines. The almost fairytale-like aesthetic of ToI really captured my attentioIt’st’s a great fit for darker moments, with its slightly grubby feel, but it also has a magical charm. It had a significant impact on gameplay by adding visual indicators to fight enemies with no health bars. Although it might seem low-tech, blood splatters and cuts appearing players’rs’ bodies are a great way to let them know ththey’re’re getting close to winning. The visuals are great!

The audio also played a significant role in affecting combat. The music perfectly suits tgame’se’s tone and adds weight to fighting with its satisfying thunks, shwings, and soothing sighs. However, there are some flaws. There are also faults. The speech bubble shows images and the narrator gives details. This works well for the most part. However, some of the squeaks or squawks can be irritating. This is a minor issue, bit’st’s not major.