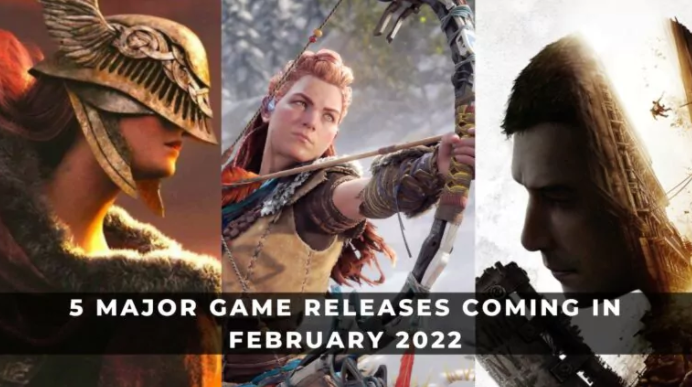 Loving ones will be rewarded. February is just around the corner after months and months of waiting. Elden Ring Horizon Forbidden East and Dying Light2 are just a few big names. Let’s get to the point. Here’s a list of February’s major game releases.

The Long-awaited sequel 2017’s Horizon Zero Dawn will be released on February 18.

The game takes place in the post-apocalyptic Western United States. Aloy sets out to find the root cause of the Red Blight, an epidemic that has been plaguing the land. To reach their goal, Aloy and her companions must travel across the Forbidden west, an obscure frontier full of deadly machines and unfamiliar areas.

The sequel includes underwater exploration as one of its main features. These areas will allow you to discover the hidden secrets deep under the seas, lakes and rivers.

Horizon Forbidden West, after the massive success of its predecessor, has been on my long-term wish list. This new entry is sure to be a masterpiece if Horizon Zero Dawn shows us anything. I was blown away by the stunning visuals and depth of the storyline in the original game. What excites me most is the promise that things will only get better. I think the excitement surrounding this game has been amplified by the addition of new machines as well as the underwater exploration element.

This game is poised to become a must-play for every gaming fan.

Kingdom Hearts III takes place after Kingdom Hearts 3D Dream Drop Distance. The protagonist Sora and his companions embark on a quest to find seven guardians. These guardians are crucial in stopping Xehanort from starting a second Keyblade War.

Multiple worlds are created based on various Disney and Pixar intellectual property. Sora will meet characters from these worlds along her journey, including Donald Duck, Goofy and Mickey.

Square Enix proved that you could combine two great products to create an even better product. The combination of the inspirational characters and the story is a great match. This is the Kingdom Hearts series.

Since long, I have been keeping my eyes on the Kingdom Hearts series Switch launch date. Kingdom Hearts III is my favorite entry. It has a unique and refined combat system that I love. This game should be played by everyone. This amazing game will now be available to more people thanks to the Nintendo Switch launch. The nostalgia factor must also be taken into consideration. It is my opinion that it is the most important reason for the Kingdom Hearts series’ success, as well as the reason why it was included on the February 2022 list for major game releases.

Elden Ring is an action-role-playing game that takes place in the realms of the Lands Between. After the destruction of Elden Ring, and the scattering its fragments, the Great Runes, the game takes place. The player sets out on a quest to discover all the Great Runes, and eventually restore the Elden Ring.

It would be a crime to not include Elden Ring in this list of February 2022 game releases. It has been a long wait for the back-to-back winner in the Most Anticipated Games category of the 2020 and 2021 Video Game Awards, but it is finally here. Hidetaka Mizaki, creator of Souls and Bloodborne, directed Elden Ring. Written by George R. R. Martin and Bloodborne, Elden Ring is sure to be one the most memorable games of the year.

I know Souls-like gaming is not for everyone. You’ve reached the right place if you’re just now learning about this magical world. Elden Ring is a great game for all Souls fans. This new game will be loved by both hardcore veterans as well as newbies.

Total War: Warhammer III, a part of the Total War Series, will be released on February 17.

Total War: Warhammer III, which will be based on turn-based strategies and real-time tactical play, will feature a campaign that is twice the size of the one in Total War: Warhammer II. This map was used in the Eye of the Vortex campaign. This campaign will allow players to maneuver their troops across the map, manage settlements, diplomatic relations with other factions, as well as engage in real-time combat if necessary.

A new mode will allow players to fully customize their battles and participate in online multiplayer battles. Each player who owns races in the previous two games will be able to use them for the multiplayer mode.

This game is one I’m excited to play. The developers of the series will continue their winning streak and this game, which is based on Total War II, will be a huge success. The innovative campaign was captivating and I was hooked as soon as the game started. Each adventure is well-written and has stunning visuals. I believe that the foundation for an original and innovative strategy game is found in previous entries. It is enough for the developers to find the same winning formula and create an engaging and rich experience.

I hope that this new entry builds upon that success and delivers one of the most memorable Total War experiences ever created. I have included it in this list of major game releases due to be released in February 2022.

We also have Dying light 2 Stay Human which will be released on February 4.

The game is set in a world that has been devastated by the zombie apocalypse. Aiden Caldwell, the protagonist of the game, plays this role. Dying Light 2 is a huge open-world game set in Europe. It features a map that is four times larger than the previous.

The parkour system is a strong presence in the game. It features many moves like sliding, jumping, wall running and climbing edges. The combat system is mainly melee-focused. All weapons have a set lifespan and degrade as the player uses them. You can also upgrade long-range weapons such as shotguns and crossbows.

The Dying Light series, which I find too saturated in the genre, is a breath of fresh water. It has original and innovative mechanics like parkour that positively impact the user experience. I was blown away by the original game. I was blown away by the original game’s robust gameplay and polished visuals. If the original Dying Light was not enough, the developers announced multiple new mechanics like stealth tactics while simultaneously improving the existing ones.

Each improvement to an already excellent series is welcome. Dying Light 2 Keep Human is truly one of the top series in its genre.

The new year has just begun and the gaming industry has already provided some truly amazing experiences. 2022 is sure to be a memorable year for gamers.