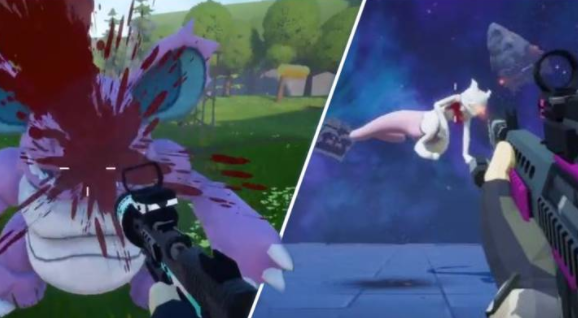 An independent developer, Dragon_GameDev2, was working on a project during his free time. This game, however, was not like many cute titles associated with small production groups. It focused on shooting Pokémon in their faces with a variety of weapons.

In promotional videos released to Dragon, we saw many monsters die from deadly bullets, including Pikachu, Nintendo’s pocket-mascot. This is not surprising as Nintendo seems to be against it.

Nintendo isn’t known for being understanding about other characters. It has always issued take-down notices to anyone using its games, including live-streamers and lets players. Through the defunct Nintendo Creators Program, Nintendo attempted to recover up to 40% from these content creators in 2015.

Dragon isn’t showing any official Nintendo content, but this is different. They have instead reconstructed many of Nintendo’s characters from the creatures collecting series and show them being blown away. This is not imagery Nintendo wants its young fans to see.

Nintendo generally allows mods to older Pokemon games. Fan-made randomisers, speed, and complicated mods are available online for older titles. These mods, however, tend to stick close to the original games and, more importantly, the lovely and cosy atmosphere they create. The FPS version of the franchise is quite the opposite.

It seems unlikely that Dragon intended to expand or monetise the project, as they initially intended it to be a one-month project. Nintendo tried to remove all images from the game on YouTube and Twitter, likely in the interest of protecting the Pokemon’s dignity.

Although Dragon could challenge the Nintendo copyright claims, they copied characters designs without permission. It seems unlikely that Pokemon FPS will be making a comeback.