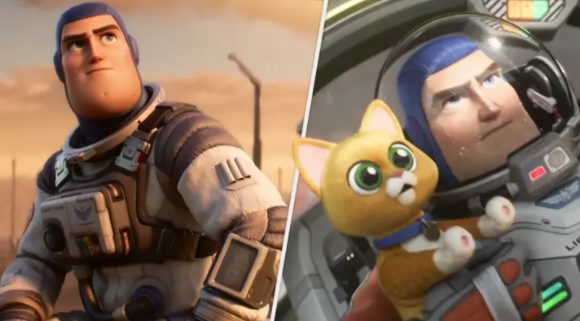 A new trailer for ‘Lightyear’ introduces a remarkable character

A new trailer for ‘Lightyear’ introduces a remarkable character

The Lightyear trailer has been released, and it is amazing. The movie will tell the story of Buzz Lightyear’s origin. They mean the Pixar universe guy who instigated the toy, not the actor. It makes sense.

This trailer introduces us to Buzz’s new robot companion, Socks. Although I couldn’t tell you how this little guy fits in the Pixar/Toy Story lore – I do not doubt that he will. He’s a cute robot kitten, everyone will love him, and you know that he’s going get lots of merch. It’s what matters. Check out the trailer below…

Chris Evans is Buzz’s voice actor. This may seem strange to Toy Story fans, but we don’t see the same character that we loved and knew. Buzz is not meant to be an astronaut in the movie to make matters even more confusing. He’s still a fictional character within the Pixar universe. This makes it more logical to imagine the film being released as an animated, fictional film within Toy Story. My head hurts.

If you can get your head around this, though, it helps to clarify that aliens (as Emperor Zurg, by the looks of it) exist in the film. IIt’dbe very dark to imagine Andy and his family living under constant threat from alien invasion throughout the Toy Story movies. This could be a very interesting spinoff.

We were able to see Lightyear for the first time in October 2013. This was much to eeveryone’sexcitement. It is a stunning sight to see Buzz with real hair. The film will be released (hahaha) on 17 June, so ddon’twait too long…

Advertisement
A new trailer for ‘Lightyear’ introduces a remarkable character