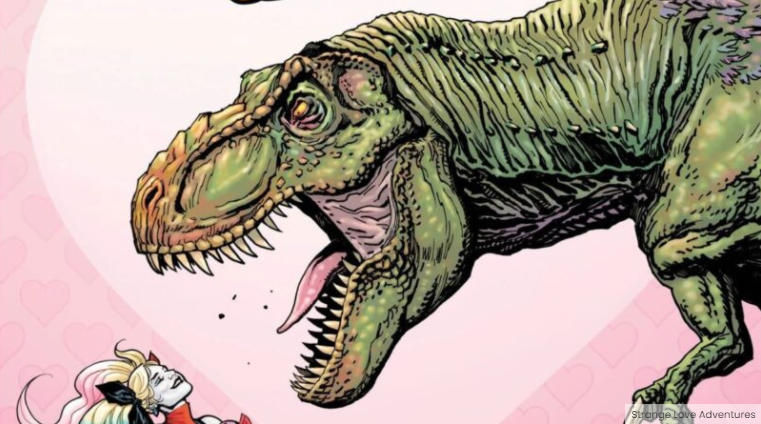 For some, romance may be an extraordinary triumph. Some people might view love as a complex puzzle to solve. There’s no wrong time to show your love for your partner, friends, and all of the romance that lies between them. If you are looking for a way to express your affection through acts, gift a comic book.

‘Lightning in a Bottle” opens the comic by putting “strange” in “Strange Love Adventures.” Upset over a recent split with the Joker, Harley Quinn vandalizes the JLA headquarters. Harley attacks Shazam, a red-clad superhero who appears on the set to correct her. Black Adam finds the whole scene fascinating and pursues Harley to…marriage?

Beyond Black Adam’s intrusion into Harley’s story, there is an actual romance at the end. The twist at the ending explains the bizarre plot details. The vivid, dynamic lettering and art perfectly match the plot’s absurdity. The comic book kicks off with exuberant oddities, and Harley-lovers are satisfied by the story.

The strangeness continues with “The Grodd Couple,” which features Flash, who acts as a romance wingman to supervillain Gorilla Grodd. Barry Allen and Iris assist Grodd in winning Primat’s romantic affection.

The Grodd Couple may be the most memorable story in the anthology. This story is unique, with Barry and Grodd teaming up to go on a double date. It also features stunning artwork and panel layouts. There’s so much to love. You’ll flip the pages faster than any man alive, and it’s a delightful romance.

Peacemaker is influenced by the Suicide Squad (2021/HBO) version of the character. He stars in “Love of Country” as a violent vigilante who seeks revenge when the Fearsome Five disrupt his Valentine’s Day plans. Through violence, the peacemaker reveals to his enemies how important the day is to him.

Everyone who loves adorable sidekicks for animals will agree that “Love of Country” is the most romantic ending. It is a kind of love that is unconditional. Strategically, the final pages act as an antithesis to the comic’s violent massacre. The triple threat combination of passion, strangeness, and adventures is available to readers.

Next, “Ritual of love” shines a spotlight on Jaime Reyes, the third Blue Beetle. This is a story about a first date that becomes a cosmic disaster. Jaime is preparing for Valentine’s Day when he receives a Scarab message requesting his assistance – in space. He is thrown into an interstellar battle between two rock monsters and then into an accidental relationship with one.

There are many jokes, so “Ritual of Love” may not be for you. The story, illustrations, and humor are all well-integrated in a way that doesn’t seem to have any hidden agendas. The comics’ strange “love” story is also worthy of its place.

“In the Name of Love” centers on Superman and Billy Batson. Insecure about approaching his crush at his mom’s wedding, Billy invites Superman along as his wiser, older wingman. Clark Kent is eager to help Billy. Wedding crashers may ruin the duo.

This story demonstrates Superman’s compassion for innocent Billy. Superman provides Billy with genuine support and advice. This monologue is a great way to get a potential mate. Sweet and straightforward, “In the Name of Love,” wins the award for the most adorable description of familiar heroes.