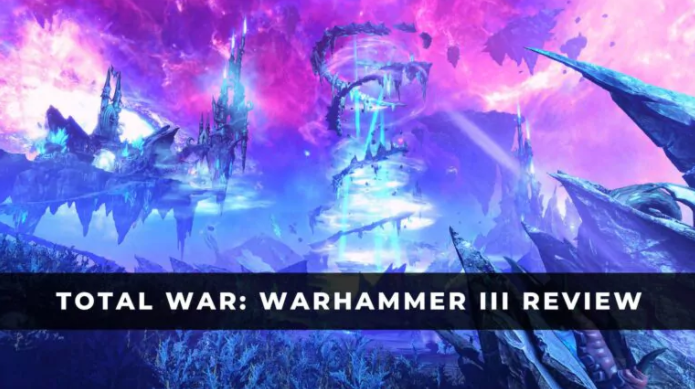 Total War, Warhammer III is charged onto your PC. Creative Assembly developed this title and it was published by Sega Total War. Warhammer III concludes the Total War trilogy. This tactical tactical title is a titanic battle royale. You will be playing as one of seven different races in the fight for the Forge of Souls. They are not the only threat that you see.

Since the first announcement, I’ve been anticipating this release because I am a huge fan of Total War as well as the various Warhammer Series. It has been worth the wait for me, I must say. The game has its flaws. There are some bugs and strange gameplay quirks that can make the game frustrating (possibly unintentionally) at times. It’s great fun overall for many reasons. Let’s now get to the review.

Total War, Warhammer III takes us back to the world Warhammer Fantasy Battles. We return to The Old World. It’s sort of. The action this time is more focused on the north in the Lands of Kislev, Chaos Wastes and, for the first time ever in series history, to the far east in the Lands of Grand Cathay. There are seven factions you can choose to play as in this title. Each faction has its own sub-factions with their own storylines and agendas.

It would take a lot of time to go through all the stories for each group. The storylines of each faction follow the same structure. Each group seeks Ursun’s power and must set out on a quest for the souls of four princes of daemons. Then they will need to use this power to guide them to The Forge of Souls, where Ursun is. The storyline is well-written and has some well-produced cutscenes.

If I’m being honest, I feel that there is a significant disconnect between the overarching storyline and the stories of the leaders you play. The storyline and cutscenes that make up the overarching storyline are intended to be universally applicable and to all factions. You will only see your leader in scenes at the beginning and end of the campaign. They are not featured in any other scenes. They are not mentioned at any point in the story, and neither is yours.

This made me feel like I had little to no influence on the story. Yes, there was a scene where our main villain shook their fist and said, “That darn Katarin!” Although it might not sound like the villain, my actions would still feel impactful. It would have been a great idea to put the characters of the players in a scene with Ursun or our villain. Total War is very narrative-heavy for Total War titles. I find it odd that there is a disconnect between the personal stories and the central storyline. This is especially true when you consider how well the prologue campaign handles the narrative.

The prologue campaign has almost every aspect that is best written and implemented in the game. It is probably the best tutorial in gaming history. This tutorial explains the basics of the title in a way that’s almost perfect. It also provides a unique storyline, which is beautifully written, acted and animated. I highly recommend this book to anyone with a history of the Total War franchise.