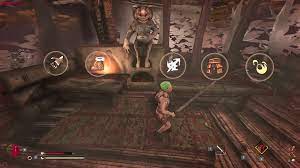 It’s nice when the title of a game conjures up images that you imagine it looks like. Then, you finally see it. What do you see in GUILT: The Deathless? My vision was of a dark and grimy medieval world full of monsters. That’s what I got. Perfect naming.

This is not all that GUILT has to offer: The Deathless. Based on Slavic folklore, the Dark Fantasy world is a great setting. But what’s the point? Here’s where the fun begins.

GUILT is an RPG action that appears to be an RPG. It has roguelike sensibilities and an eager eye for medieval monster fighting. Its shared world is what sets it apart from other options. Every player contributes to the shared world. If another player unlocks shortcuts on the map, they are available. You can share loot and leave tools for your fellow goblin-slayers. You can also mess with them. It doesn’t matter how you play it or how much you contribute, and you can’t avoid being part of the ongoing world.

Permadeath is a game feature that allows your current character to perish. Regardless of your death, your choices will still be valid. This is a nice feature that allows you to feel that your fallen hero will continue in some small way. This balance between playing alone and having an unspoken connection to strangers is what Death Stranding excelled at, and it’s something I’m happy to see that other developers are taking up the ball and running with it their way.

GUILT’s core is its combat. You can smell the delicious aroma of a From Software title coming from GUILT. It doesn’t have to apologize for the smell, but it does try something different with the shared world and permadeath. It’s just one part of GUILT.

While it’s an action RPG that can be used in battle, it is not particularly innovative. However, the systems surrounding it add a lot of flavor to the pot. You have many choices when you move through the procedurally generated map and then go into battle against the punishing foes. While your actions may lead to a stronger avatar, there is a good chance that you will suffer misery as you follow the path of The Deathless.

GUILT The Deathless tries to find the right balance between ambition and compromise. It’s doing a good job of balancing that in its early days. It’s easy to pick and choose from iconic games, but only when the overall vision can bring them together in a cohesive, natural way that a game can work is it possible to succeed. GUILT still needs some refinement to gel its ideas properly. It also needs more meat on the campaign’s bones and more polish visually. But this is why it’s Early Access. It will be fascinating to see how this plays out over the next d years.

Advertisement
MAKING A GRIM WORSE (OR BETTER!) IN ACTION RPG GUILT – THE DEATHLESS