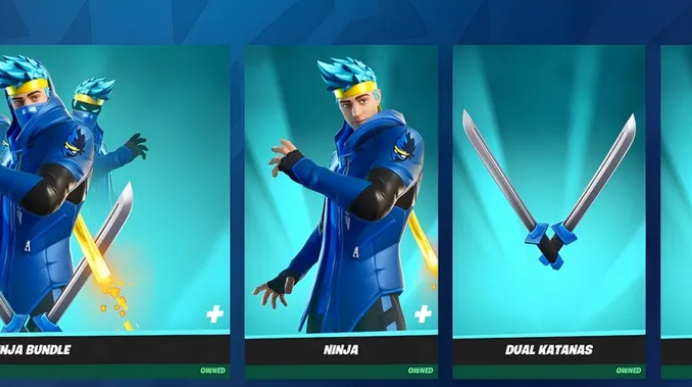 Fortnite streamer Tyler “Ninja” Blevins’ icon skin is back! Lucky players can get their hands on it by using the code “NINJA” at checkout.

The original skin was released as part of the icon collection in January 2020. It has been reintroduced to the Item Shop for the first time since August 20,21.

Ninja announced its return via Twitter, asking players to send him pictures as soon as they land it.

Many players did just that and littered the replies to the tweets with photos of their skin.

However, diorsgrande, a fellow Fortnite streamer, also responded, saying “didn’t your wife tell it was never going to come back like one year ago and it has returned like a million different times since then”. This was referring to an announcement made by Jessica Blevins that it wouldn’t be appearing after May 2020. This was falsed by the item’s reinstatement in the Loserfruit bundle.

Another Twitch streamer, GameFreakness, said that they’d like to see the skin come in different colours from its default blue, suggesting that Epic games could introduce red and pink versions and donate some of the profits to the Red Cross and a breast cancer charity respectively.Meanwhile, Ninja retweeted fellow Fortnite streamer Ranger, who posted a clip of themselves getting an impressive long-range kill while wearing the skin.

Ninja was also in the news for many other reasons. appeared on the Tonight Show with Jimmy Fallon after a rebrand.

He also shared his plans to participate in an EVO Super Smash Bros Tournament back at 2019 during a live stream with fellow poker influencers Ludwig, MrBeast.

For more coverage of streamers like Ninja or Dr. Disrespect, make sure to Follow Us. Midnight Society just announced a new hire.