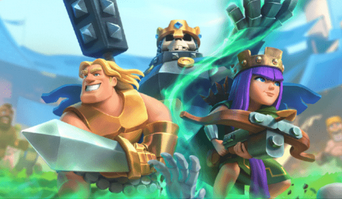 Clash Royale has received a major update that saw multiple cards get balance changes. Mother Witch, Electro Giant and a few cards received massive buffs, while The Log and Royal Ghost got toned down. Here’s a quick overview of the Clash Royale balance updates.

Her win rates and users were affected by the last balance change. This buff counters her previous Hitpoints reduction with a DPS boost, allowing her even faster to make Cursed Hogs. This is something many players wanted. Her hit speed has increased by 9%, while her first hit is 25% faster.

The Barbarian Battle Ram and Barbarian Hut have been somewhat underwhelming for quite some time. They received a solid universal hit speed buff of 7% in the latest update. While the cards mentioned above have been a little weaker for some time, the Barb Barrel has been a solid card. With the Barrel, range nerf, there is an opportunity to buff all four Barbarian cards in-game and hopefully increase their use/win rate.

Because of its power and versatility, this piece of sentient wooden has been the most popular card in the game for quite some time. After dominating the meta for several weeks, it is now time for it to be nerfed. The developers have reduced Crown Tower Damage but kept its knockback ability. It can still defeat log bait and retains its Legendary knockback status.

It won’t be as effective at dealing Crown Tower Damage as other spells, but that is the trade-off. This is a significant change, as The Log will still be powerful after the nerfs. The developers are not planning to make any major balance changes to The Log, as the knockback ability was removed.

The balance patch will change the meta, as some of the dominant cards were subject to severe nerfs. It will be interesting to see how players adjust to these changes. To view all the changes, see the official patch notes. For more information about the 20-Win challenge in Clash Royale, you can visit our breakdown of the rewards.