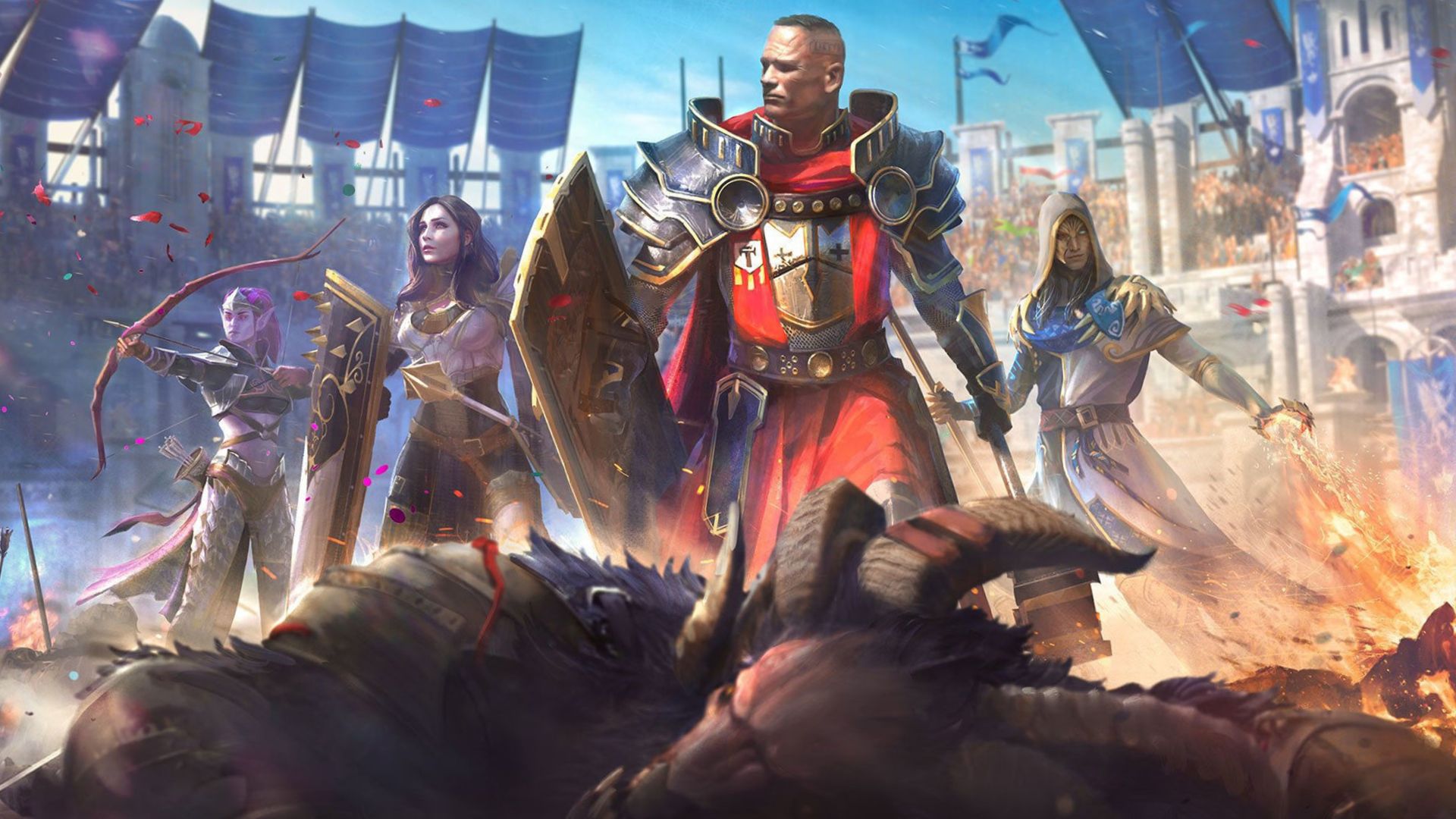 The primary way to get champions in RAID: Shadow Legends is to spend shards to summon them in the Portal.

In the game, there are four different sorts of shards, each with a different summon rate and varied value.

The higher a shard’s rates, the more precious it is and the more difficult it is to get.

In RAID: Shadow Legends, you may obtain shards via battling, completing objectives, challenges, and quests, attending events and the Arena, opening chests, defeating bosses, collecting different awards and free presents, purchasing them from the market, and purchasing packs.

How to get Sacred Shards

The Sacred Shard has the highest summoning rate and is the most expensive item in the game.

As a result, it is the most difficult to achieve, especially early in the game.

When you reach the late game, you can earn up to 13 Sacred Shards monthly if you work hard enough.

Earlier in the game, you’ll have to rely more on unique reward systems and one-time awards to get Sacred Shards, as repeatable ways aren’t accessible until you have a powerful squad.

There are 12 possible methods to obtain Sacred Shards in RAID: Shadow Legends, which are described here.

Daily login prizes are a set of awards you may claim in RAID: Shadow Legends every day.

After claiming the award for one day, you can claim the reward for the next day the following day.

You do not forfeit the award if you do not claim it one day. It will be available to you the next time you launch the game.

However, you will not be able to collect the following day’s prize until you have claimed the previous one, which is why you should claim daily login rewards every day.

On day 78, you will get your first Sacred Shard from login rewards.

Once you’ve completed the daily login system, the same set of login prizes will be replayed every day until you reach the conclusion of the system, at which point you’ll start collecting one holy shard per month if you claim every day.

The daily login rewards menu is accessible via the menu on the left side of the main screen.

When your account hits certain levels, you can collect progression prizes.

The advancement rewards system is accessible via the menu on the main screen’s left side.

Star awards are items that you may obtain by collecting a certain amount of stars in the Campaign or Faction Wars in Normal, Hard, Brutal, or Nightmare difficulty.

It will take some time for novice players to achieve these positions in the star rewards system, especially in Faction Wars and the Campaign’s Brutal and Nightmare modes.

You may access the star awards system at the bottom of the stage selection screen in Campaign and Faction Wars.

Mission milestones are unique awards that may be obtained after completing a certain number of missions.

When you finish a mission, you get one point toward the milestone you’re presently aiming for.

When you complete one milestone, the next one becomes available.

The first mission milestone that awards a Sacred Shard is the second one, which is unlocked after completing all 151 missions in the game.

The mission system and mission rewards are accessible via the Missions button, which is placed at the bottom of the screen in the City.

Monthly quests also award a Sacred Shard as a prize.

You can obtain a Sacred Shard after finishing all five monthly objectives.

One of the monthly tasks is to finish all of your daily missions and claim the reward 30 times.

As a result, the quickest you can accomplish all of your monthly objectives is in 30 days.

Your monthly missions do not reset every month, so if you skip a few days, you do not lose your progress.

Monthly missions only refresh once you’ve completed them and obtained the Sacred Shard.

You may access your monthly missions in the City by clicking the Quests icon at the bottom of the screen.

Dungeon challenges are challenges that are particular to dungeon objectives.

A shard is a prize for completing all dungeon tasks in your current section.

A Sacred Shard is a prize for completing all tasks after you reach Part 5 of the dungeon challenges.

You may access your challenges in the City by clicking the Challenges button at the bottom of the screen.

Doom Tower is a succession of adversaries you must defeat to proceed through the tower.

You obtain a prize every time you complete a level in the Doom Tower.

On Doom Tower’s hard difficulty, there are two Sacred Shards to get, the last of which is the last level.

Again, this is intended for late-game gamers because Doom Tower hard mode is quite challenging.

When you achieve level 40, you can visit Doom Tower via the Battle menu.

Clan boss is a feature that allows clan members to face bosses many times each day.

You are rewarded for taking on a clan chief.

The reward is a chest. However, the contents change based on the toughness of the clan boss and the total amount of damage your Clan dealt it.

If your Clan deals enough damage to a clan boss in either Nightmare or Ultra Nightmare mode, the chest you get may contain a Sacred Shard.

All other boxes obtained from clan leaders have no possibility of granting Sacred Shards.

To obtain the top chests that can deliver Sacred Shards, you must be a member of a mighty clan, which implies you must be very powerful as well.

In Arena, If you are powerful enough, you can acquire Sacred Shards.

The platinum Arena chest, which you obtain after reaching the platinum tier in the Arena, may contain Sacred Shards.

The platinum tier is the highest tier, which implies you must be extremely powerful to achieve it.

When you achieve Gold, you may also buy Sacred Shards from the Bazaar in the Tag Team Arena.

Sacred Shards are occasionally rewarded at events, though not usually.

As a result, we urge you to check where activities are taking place constantly.

Referrals are players who join the game after clicking on your recommendation link.

You may discover your referral link in the City by clicking the Referral Program icon in the top left corner of the screen.

You will get a Sacred Shard if a player you referred reaches level 60.

If you refer three people who all achieve level 60, you will earn four Sacred Shards, one for each player who reaches level 60 and one as a bonus.

It might be tough to find recommendations, much alone ones that reach level 60.

As a result, some committed gamers refer themselves and establish an alt account to get the benefits on their primary account.

Many of these packs include Sacred Shards, although not all are worth buying.

How to get Void Shards

In RAID: Shadow Legends, Void Shards are the second most precious shard.

They have the same summon rates as Ancient Shards but can only summon champions of the Void affinity.

Void Shards are less challenging to get than Sacred Shards, although they are still uncommon.

Most methods for collecting Void Shards in the game are the same as those for gaining Sacred Shards.

However, the same approaches typically need you to reach a far earlier point in the game/territory. system’s

This implies that you won’t need nearly as vital to acquire Void Shards as you would Sacred Shards for some approaches.

You obtain a Void Shard after finishing the last step in the Campaign’s final chapter.

Unlike Sacred Shards, you can obtain a Void Shard via one of the ordinary tasks on the monthly quest page.

The specific mission requires you to accomplish all daily quests and claim the reward 30 times.

You may also obtain Void Shards through the missions tab.

These are also prizes for completing some standard tasks later in the game.

Clan against Clan is a feature in which your Clan competes against another.

You will receive various incentives depending on how well you do.

Later tier prizes contain Void Shards, but you’ll need to be in a powerful clan to access these tiers.

How to get Ancient Shards

In RAID: Shadow Legends, Ancient Shards are the third most precious shard.

They will be your primary source of rare champions in the game, making them valuable.

You’ll receive a few here and there even if you don’t attempt, but if you want to obtain many of them quickly, there are a few options.

Unlike Sacred and Void Shards, you may actively farm for Ancient Shards for as long as you have the energy.

There are 14 methods to obtain Ancient Shards in RAID: Shadow Legends, which are described here.

Most of them are the same as both Sacred Shards and Void Shards.

However, Ancient Shards come as prizes more often and at a far earlier point in the game than Void Shards.

You may also claim one Ancient Shard for free every week in the Packs area of the store.

The free Ancient Shard you can claim does not refresh every week.

Instead, after you claim it, a countdown begins, and you can claim it again after seven days.

Though uncommon, Ancient Shards may be purchased for 200,000 Silver.

Only five Ancient Shards may be acquired from the market every month, after which they will no longer exist until the next month.

Except for Minotaur’s Labyrinth, all dungeons in the game feature Ancient Shards in their treasure pool. Thus, you’ll possibly obtain one after finishing a level in one of these.

When your Clan unlocks an activity reward chest, you may claim it in your clan window.

Ancient Shards may be one of the prizes from these chests.

How to get Mystery Shards

Mystery Shards are the most prevalent and, consequently, the least expensive shards in the game.

Rare champions are the highest rarity champions you can summon with Mystery Shards, but only at a meager rate.

On the other hand, Mystery Shards are excellent for gathering fodder and greens for champion fusions.

Even if you’re new to the game, you may quickly harvest many Mystery Shards.

Furthermore, Mystery Shards may be purchased in large quantities from the market and are distributed for free numerous times throughout the day via various reward systems.

There are ten distinct methods to get Mystery Shards in RAID: Shadow Legends, described here.

Every day, in addition to the free one from the shop, you can claim a free Mystery Shard.

You may claim a Mystery Shard from the playtime rewards system after 20 minutes of playing the game or having it open.

In the City, you may obtain playtime rewards by clicking the hourglass icon in the bottom right corner of the screen.

Mystery Shards are part of the treasure pool in both dungeons and the Campaign, so you’ll get some just by playing the game.

Furthermore, because Mystery Shards are less valued, they have a far larger probability of falling than Ancient Shards.

We encourage you to claim all of your free Mystery Shards each day, even if you don’t need them right now.

The quickest way to farm Mystery Shards in RAID: Shadow Legends is first to claim all free ones, then buy all for sale on the market, and then run stages in the Campaign or any dungeon that contains them as loot.