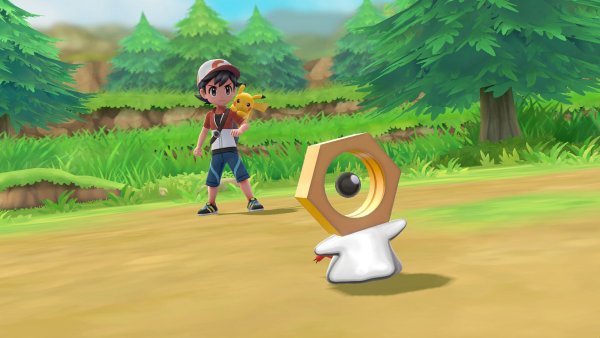 The Pokemon Company and Nintendo uncovered today that another Mythical Pokemon called Meltan will make a big appearance in Pokemon Let’s Go, Pikachu! what’s more, Pokemon: Let’s Go, Eevee! at the point when it dispatches this November.

As indicated by The Pokemon Company, Meldan is another types of Pokemon that is produced using Liquid Metael, and its shape is extremely liquid. Its fluid arms and legs can consume metal and retain it into its own body.

Here’s a short data about the new Pokemon, Meltan:

Meltan is a Steel-type Pokémon with a body made for the most part of fluid metal, which makes its shape liquid. This Pokémon can utilize its fluid arms and legs to erode metal and retain it into its body. Meltan can create power utilizing the metal it assimilates from outside sources. It utilizes this power as a vitality source and for an assault it fires from its eye

In Pokémon GO, sightings of Ditto that have transformed into Meltan have been reported. Professor Oak and Professor Willow have started research on Meltan. Professor Oak, one of the leading authorities in the field of Pokémon research, is based in the Kanto region’s Pallet Town. In Pokémon: Let’s Go, Pikachu! and Pokémon: Let’s Go, Eevee!, he gives a Pokédex to both you and your rival—entrusting you with his dream of completing it. Meanwhile, with the help of Pokémon GO players around the world, Professor Willow conducts his research in the field to fully understand the habitats and distribution of Pokémon. He was once an assistant to Professor Oak, and he talks to Oak, his mentor, whenever he runs into a hitch in his research.

More information about Meltan should be revealed in the coming weeks. Check back with us near the release date for more exciting news about Pokemon.

Watch the video below to learn more about Professor Oak and Professor Willow from Pokemon Go’s ongoing research on Meltan: