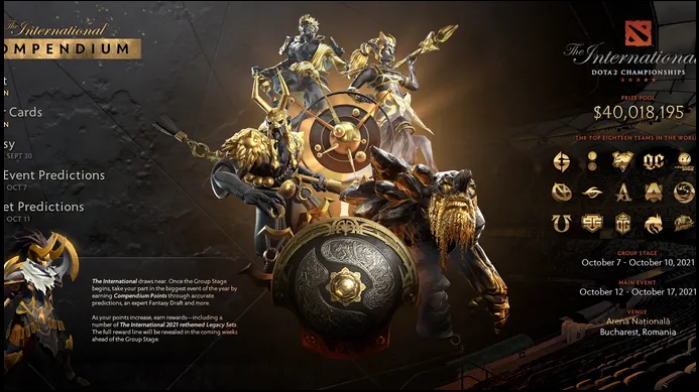 The International is a top-tier tournament in esports. The International boasts a prize pool worth millions of dollars, which is funded entirely by the community. Each year, it continues to break its own records.

Valve has just released an update that includes a compendium free of charge for The International 10. Let’s first look at the history behind the Interactive Compendium in DOTA 2 before getting into the new features.

25% of the earnings from the compendium are forwarded to The International’s prize pool, making it the most prized tournament in esports. Since 2013, Valve has released either a compendium of a battle pass to the International.

The prize pool from the Battle Pass event is now being used because TI has been delayed from 2020 to 2021. Valve has released a compendium for TI10 that anyone can access.

The entire prize pool for TI10 was secured in 2020, so DOTA 2 players were given a compendium to keep the event alive. The compendium is not as complete as a regular Battle Pass, but it does include some of the same content.

The compendium instead features a Fantasy section and a Predictions tab. This confirms that the compendium’s main purpose is to give players an immersive experience with TI10.

However, the Arcana Poll or bonus cosmetics have not been mentioned in the compendium. These options may be added before TI10 launches or later.

Get a Bonus Discount on All Supporter Packs

Valve announced a 50% discount for all supporter packs available this season, with TI10 just a few weeks away. Fans who previously couldn’t afford these packs due to high prices will now have an opportunity to save 50%.

As long as Compendium forTI10 is not available, the discount will still be valid. Players should be aware that the Supporter Packs’ content will not be available after TI10 and will expire once the tournament ends.

Follow us to receive the latest news and guides on DOTA 2.