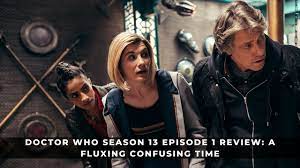 It has been more than ten months since Revolution of the Daleks aired and almost a year and half since the end of Season 12 of Doctor Who. It’s been a while since The Doctor’s true origins were revealed. The Halloween Apocalypse doesn’t address this, but it does introduce a new major threat to the universe: The Flux.

We also meet Dan in the season premiere. He will be joining Yaz and The Doctor in all six episodes. Chris Chibnall, the showrunner, will also be present. This is Chris’ last full season as showrunner for the timeless sci-fi series. It is a lot to balance the first episode, and it can buckle under the weight at times. Despite this flaw, it’s a good start to the season. It creates a captivating sci-fi mystery and should keep viewers excited about what’s next.

STORY – TOO MUCH, YET NOT ENOUGH

Episode 1 of Season 13 doesn’t have much to offer, which is odd considering there was so much happening.

The story centers on Yaz and The Doctor following Karvanista, a Lupari. Yaz is trying to find answers about The Division. Karvanista abducts Dan and locks him aboard his ship. Yaz and The Doctor track them down, having an argument amid some strange happenings in the TARDIS. The Doctor discovers that The Flux has destroyed the universe and leaves us with her and her friends in an even more dangerous predicament.

The Doctor’s adventures are interspersed with an audience trip to 1820’s Liverpool. The crew encounters a Sontaran ship and a Weeping Angel. There is also a kidnapping and a space station called “Outpost Rose”. This is a fast-paced adventure that packs a lot into 50 minutes. It can sometimes be difficult to keep up. It makes up for the disjointed story by weaving a compelling mystery through each scenario. The episode ended with me curious about the new villains, characters, and their connection to The Flux.

This story is not stand-alone. The Halloween Apocalypse doesn’t work. It’s the beginning of The Doctor’s investigation into The Flux. This story could have been better suited for a binge-watch release. We have to wait weeks for answers to all the questions that were raised by the premiere. If there was a compelling, contained story in the premiere, this wouldn’t be an issue. We are left with the beginnings and hints of a mystery.

Jodie Whittaker’s Thirteenth Doctor is still the best part of this current Iteration. Whittaker is a master of the technical language, whether she’s uttering technical jargon to Yaz or saying all she needs with one glance at the new villain. Every second of her performance means something. The episode does not cover the Doctor’s story about The Timeless Child. Its ramifications continue causing friction between Yaz and her.

Graham and Ryan are gone, so Mandip Gill’s role as Yaz is more prominent. It will be fascinating to see how she develops as a character over the course the season. She is stuck for now in the role of plucky sidekick. A little nuance is added by her pressing The Doctor for personal answers. It’s not nearly as charming as Mandip Gill’s charming performance.