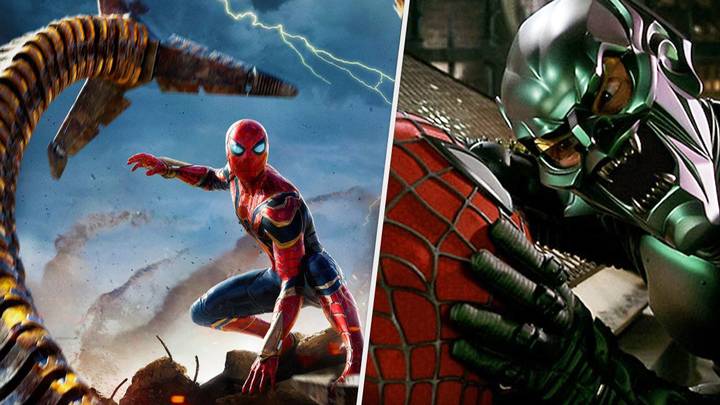 Just over a month remains until the theatrical release Spider-Man : No Way Home. The anticipation is starting to hurt my physical health.

Tom Holland’s wall-crawler faces his greatest challenge yet when a spell goes horribly wrong and opens the multiverse, putting our hero in fights against enemies from past lives. First teaser for the movie confirmed Alfred Molina’s Doctor Octopus and hinted at other villains. The No Way Homeposter is now available. It finally confirms the classic villain that we’ve been waiting for.

Willem Dafoe’s Green Goblin is what I am referring to. In Sam Raimi’s Spider-Man, the nefarious fiend was unable to control his glider. No Way Home’s many-versed antics have allowed him to return to terrorize Holland’s version.

The original trailer teased us with a laugh and a glimpse at a pumpkin bomb. But the new poster shows the Goblin lurking in background. The costume he’s wearing is the same as the Raimi movie costumes. He also managed to retrieve his glider from storage. This is our first glimpse at the villain from No way Home and it’s clear that it is him. It was James Franco, which I was beginning to fear.

Side note: While I am certain this will neverhappen because Sony, how incredible would it be to have Willem Dafoe’s Norman Osborn become the next big bad in the MCU? I can dream, I suppose.

Spider-Man: There’s No Way Home opens in theatres December 17. If anyone from Sony or Marvel would like to send me a sneaky copy, that would be great. I won’t reveal my identity to anyone.