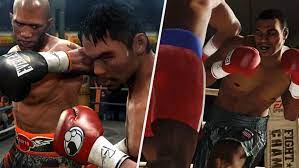 A new report claims that Electronic Art’s beloved Fight Night franchise, which has been inactive for so long, is finally making a comeback.

In an industry insider’s report for VGC Tom Henderson learned from EA sources that a new entry has been approved by the publisher. It has also entered early development. Henderson had previously reported accurately on every aspect Battlefield2042before its unveiling earlier this year.

According to his report, Fight Night is being revived under the codename “Moneyball”. It sounds like the project is at least a few more years away from being released. Henderson notes that the “core development” of the game has been halted to allow EA and its studios to focus on the next EA Sports UFC title, which is expected to be released in the second half of next year.

EA has been teasing a new Fight Night for over a year, but it has never fully confirmed anything. It’s unlikely that the publisher will soon have any information to share or show off, given the current state of the project.

The final game in the series, Fight Night Champion was released in 2011. It’s safe to assume that a new entry was a long-awaited.