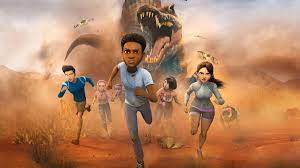 Fans finally received the Camp Cretaceous season 4 trailer after a long wait. It can be found on the Jurassic World YouTube channel.

The trailer opens with the campers in their boat being attacked by the Mosasaurus. The campers then wake up on the beach, surrounded by the wreckage of their boat. The campers had no control over their landing spot. Many fans speculate that Isla Sorna could be the setting for season 4. Scott Kreamer has now put this speculation to rest.

The campers discover an unknown island on their way to Jurassic Park. They were heading to Costa Rica at the conclusion of season 3. so it is possible that this new island lies east of the Muertes Archipelago.

A trailer shows drones transporting a severely wounded tyrannosaurus from its location to fight a Kentrosaurus. The drones seem to be forcing dinosaurs into fighting each other. But who is the pilot of the drone? Mantah Corp may be the antagonist organization in season 4.

Surprisingly, this trailer didn’t address the question: What kind of dinosaur was on the boat with the campers. The camera pans below deck to the door, and then there is a growl. It looks like a dinosaur has taken refuge on the boat. Fans have speculated about what kind of dinosaur it might be. The Camp Cretaceous season four trailer does not provide an answer.