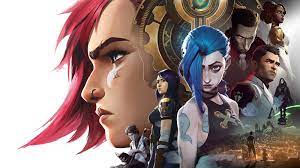 League of Legends continues to grow with regular new champion releases and spin-off games. Riot Games has been trying to expand beyond video games for years. Multiple animated shorts were made based on characters from the popular MOBA. These animated shorts showed the potential for a movie or animated series that was based on the game. After several years of development, the League of Legends series is now available. Arcane, a nine-episode animated prequel, serves as an origin story for some of the most famous characters in the game.

TABLE OF CONTENTS1 STORY: A MASTERCLASS in STORYTELLING2) CHARACTERS and PERFORMANCES: COMPLEX AND FLAWED2.1.) SCREAM YOUR HEARTS3) PACING, EDITING: QUICK AND METICULOUS4) CINEMATOGRAPHY & SOUND: A TRIUMPH IN THE MEDIUM4.1.) LIVING CAMERA4.2) MUSIC TO OUR EARS

STORY: A MASTERCLASS in STORYTELLING

Arcane is set in Piltover, a prosperous city. We follow Vi and Powder, sisters who have had to deal with many hardships that caused a rift in their relationship. This fissure stretches from Zaun to Piltover, creating tension between the sides. Although it is hard to tell the story without more detail, the more people know, the better. Interestingly, I have played League of Legends, and while I was aware of how certain things would turn out, there was much more I didn’t anticipate.

It is very unpredictable as to the direction that the story takes. This extends beyond story beats and dialogue. The audience often has to stop and question why a character doesn’t just solve the problem. This is not a common cliche in Arcane. The series treats its audience like they are intelligent. This trust is displayed through simple storytelling techniques such as visual storytelling.

Instead of Zaun’s character saying, “the air is terrible,” the series will show an outsider with a mask. It isn’t the main focus, and it’s not brought up until relevant. It just feels like the character is trying to explain something to the audience. This is where visual storytelling is crucial, as it demands that the audience pay close attention.

Arcane feels grounded and mature despite being based upon League of Legends. One complaint is that one character in the series seems “well placed” in many situations. It’s almost always coincidental. The emotional journey of these characters and their final destination at the end make the season so special. The show’s characters are the main reason for this emotion.

There wasn’t one character that I didn’t like by the end of Arcane. These characters are fascinating because they have no supernatural powers or any powers. I also recognize them from League of Legends. Many characters aren’t from League of Legends, and many are human. All of them are also extremely flawed. There aren’t many characters that one could see and believe are completely evil. It’s the same with characters. They are layered, so any initial impressions of a character may change by the end.

Arcane is full of complex characters

This is because a lot of information about the characters is withheld. A character may appear manipulative or evil at first, but Arcane will reveal their backstory six episodes later. The character’s motivations are now clear, and you can feel empathy for them. You want them to succeed. However, even characters you thought were great might not be so. This is a very unpredictable aspect of the show.

Arcane is a group that primarily follows Vi and Powder. Viktor and Jayce are also involved. The scientists have two goals: to harness the power of magic to improve the world. These were some of the fascinating decisions they made. At first, Jayce and Viktor were not the best of friends. Part of it was because I was unsure where Arcane would take me. All the pieces fell into place by episode 9. The stories and characters are interwoven beautifully and emotionally. Season 2 is now confirmed. It will be fascinating to see which League of Legends champions emerges.