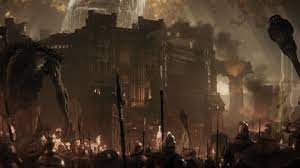 Elden Ring received a new trailer during The Game Awards 2021. This trailer features a lot of Hidetaka Mizaki, game director, and George R. R. Martin, author. The release date for the action RPG is still February 25, which will please eager fans. S, Xbox One, and PlayStation 4 and 5.

A new Elden Ring story trailer reveals some interesting lore. According to it, the demigods started to fall after the stolen rune. Soon, the war was known as “The Shattering,” and darkness fell upon the land.

The Elden Ring was also broken. It is unknown who did it or their motives. Godwyn the Gold was the first demigod that fell. General Radahn, the Conqueror of Stars, and Melania The Severed (the Blade of Miquela) were the two strongest and last remaining standing. But, there was no victor when they sparred. The result was a fractured world.

The Elden Ring trailer and other media show that the game is similar to previous FromSoftware titles. To rise to the Elden Ring’s power, players will play the role of Tarnished. Your quest is to rise to the top to become an Elden Lord in a world that has been ravaged by war.