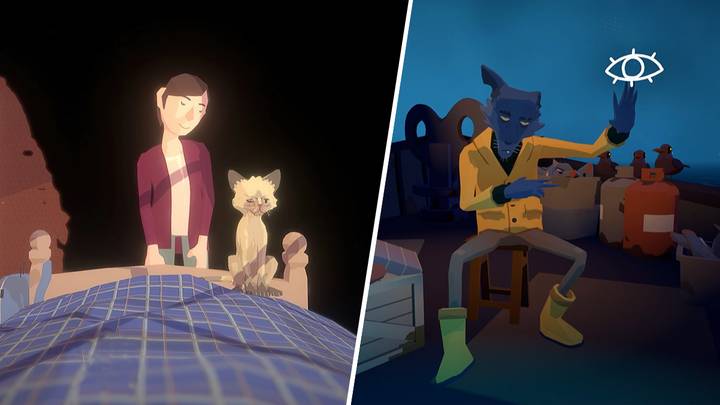 I was astonished by the way Before Your Eyes made me feel. So, I wrote about how this indie title helped me confront a trauma. It combines a powerful narrative with a gameplay progression system that relies exclusively on blinking.

Before your Eyes is an indie game for Mac and PC that uses a physical camera to capture the core gameplay mechanic. Your character blinks when you blink in real-life (as captured by your camera). Blinking can be used to answer questions or skip scenes.

After I had played the game, Oliver Lewin, the game’s director/composer, and Will Hellwarth, the game’s creator, spoke with me. I was curious to find out where this title got its idea.

Hellwarth says that the idea “definitely predated” the game by a long period. “It was a matter of waiting for technology, keeping an ear on it, and having the opportunity to do it.” Lewin says, “From the beginning, we knew that part of that idea was this type of reflection on life. It was all about time passing, letting go, and reflecting back on the past.

Before your Eyes is a sensitive topic about childhood illness. Graham Parkes, the writer of the game, drew on his personal experience to create the game.

Lewin says that Lewin had a severe childhood illness that left him with a number of very serious health problems. I believe he took a lot of inspiration from it as a personal touchstone. We decided to concentrate more on younger people – who we can relate to more – rather than 99 and on their deathbed. This is where it all started.

Because the game was drawing from an area that the developers have yet to experience, it presented a new challenge. Hellwarth says that the the second half was hardest part of making the game was also a recognized constraint. “Let’s talk about a portion of our lives that we can say something about, if you really want to get personal and be honest.

At this point, I was forced to ask Hellwarth & Lewin about the narrative design for Before your Eyes. The game requires you to tell the story of your character’s entire life. Interactive gameplay requires you to make some choices. While small in number, these choices make it clear that you are not telling of events predetermined. You are creating your own story.

This twist was not obvious when Before Your Eyes first came out. I was so enthralled in the gameplay that I couldn’t see the deception. This was an intentional design decision to warn the player about what lay ahead. Did I miss it during my playthrough?