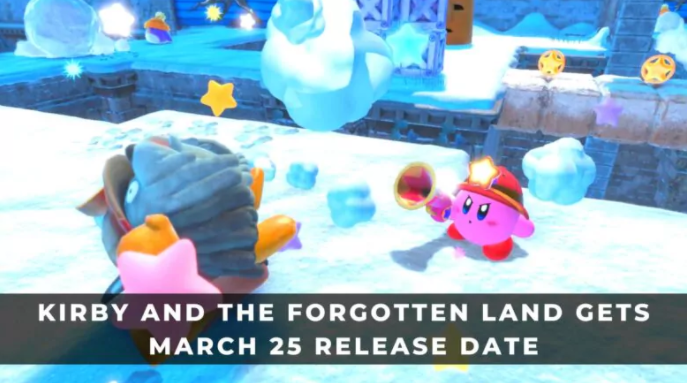 Not long ago, Kirby and the Forgotten Land were given an E10+ rating by the ESRB. This was made in September 2021. It also announced the game’s release window. It was reported that the game would be released sometime in spring 2022, but no specific date was given. A few months later, more information about the game was made public.

This includes information about Kirby’s official release date and Forgotten Land. The new Kirby game will be released exclusively for the Nintendo Switch on March 25, 2022. Kirby Fighters was the last game in this Kirby series to be released in September 2020.

A trailer featuring Kirby, the Forgotten Land, and a reveal date has been released. It is described as a 3D platforming adventure. Kirby will find out that the Beast Pack has kidnapped Waddle Dees in an unknown country. Kirby and Elfilin set out on a rescue mission.

To save Waddle Dees or defeat enemies, Kirby can use all his abilities, even new ones.

You must travel the new world to save as many Waddle Dees as possible. Kirby will use his skills to defeat enemies and overcome platforming challenges. Kirby has new abilities beyond his usual copy abilities. These include the Drill and Ranger copy abilities. These abilities give him valuable advantages, such as drilling underground and attacking distant enemies.

Kirby, the Forgotten Land offer co-op gameplay. Kirby can be aided by a Bandana Waddle Dee teamed up with another player. The second hero can attack with their spear. The Joy-Con is shared to enable co-op gameplay.

For fun co-op play, team up with a friend or family member.

Waddle Dee Town is the hub of Kirby’s latest adventure. As you rescue more Waddle dees, it will grow. These developments can lead to new shops opening and unlocking new mini-games. Kirby can even help customers in a cafe. If you need a break from all the action, this is the place to go.

Kirby and the Forgotten Land are now available for pre-order. This year, the Kirby series will also be celebrating its 30th anniversary. Wallpaper can be downloaded free of charge from the Kirby site to commemorate this occasion.