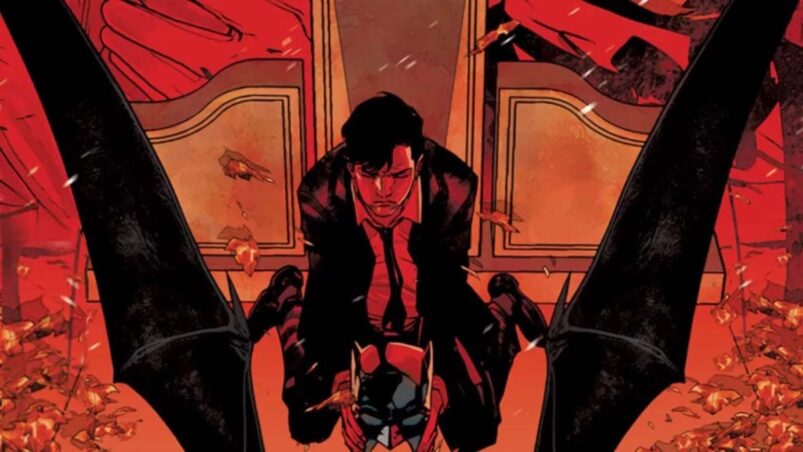 It seems like trying to put a new spin on Batman’s origin story is something that the Dark Knight’s war against crime was. While admirable, it ultimately fails. DC has been telling Batman’s story for close to 83 decades in movies, comics, TV shows, and video games. How much more can we say? It’s quite a lot of Batman: The Knight #1 can be believed.

The Batman: The Knight #1 is the first chapter of a miniseries that will run for ten issues. It was written by Chip Zdarsky and Carmine di Giandomenico and featured Bruce Wayne as the main focus. There’s some foreshadowing about Bruce’s future crime-fighting career throughout, including a supporting role for Bat-villain Hugo Strange. But, this issue doesn’t even feature a bat.

Batman: The Knight #1 instead dives into an area of Batman’s origin rarely seen in detail: Bruce’s school years. This bold decision by the creative team is a great one. Bruce is like never before: A wiry young man still honing his legendary intellect, formidable fighting skills, and, equally important, trying to figure out how to use them all responsibly.

Bruce must confront hiCity’sue privilege of being Gotham City’s richest man. His wealth and influence allow him to do almost anything. Another big swing by Zdarsky and di Giandomenico is Plascencia. It s “ems almost crafted to “address the “Batman is an rich jerk” trend that is popping up on Twitter all the time. It proves to be another win for the creative team.

Batman: The Knight #1: Alfred, the faithful butler, calls Bruce on his insatiable quest to find justice for those less fortunate than he is. Alfred criticizes Bruce for not taking up bare-knuckle fighting as a form to combat training. Alfred points out that his opponents shaBruce’ssame finance’s situation as Bruce’s parents. Bruce views his back-alley brawling as a DIY superhero boot camp. In reality, however, he uses a self-serving outlet to vent his anger and perpetuate the same class Bruce’sity that made him orphaned. Bruce’s shocked expression reveals that he will never forget this harsh lesson.

TBruce’sent is just as important to Bruce’s success as his bat-cmother’sthrough his window or his mother’s pearls scatteringit’sa blood-spattered street. Yet, it’s something that we have. It’s seen done quite as directly. It’s simple and direct, but not too complicated. This further illustrates the new storytelling veins Zdarsky and di Giandomenico have tapped in this ostensibly untapped origin story.

There are certain aspects to Batman: The Knight #1 that may feel familiar to comics fans who have been reading it for a while. The dark tone and quasi-realistic approach to the miniseries are sZdarsky’sor Batman: The violence’s Zdarsky’s meditation on violence’s repercussions is something ZdarsMarvel’sxplored to greaGiandomenico’srvel’s Daredevil. Di Giandomenico’s dark pencil don’t inks are beautiful, but thPlascencia’sak with the Bat-mould. Plascencia’s vivid color palette reminds me of the unique hues used by FCO Plascencia on Batman: Zero Year.

This familiarity, however, is notdoesn’tness. Batman: The Knight #1 has a reboot or retelling. It’s a new chapter that fits in between the stories we know. In that sense, some familiarity is not only expected but welcome. We are Batman’sfor a fresh perspective on Batman’s origins, not a completely new Batman. Even if Batman: The KnightZdarsky’some thematic content with Zdarskthat’sredevil run (which it does), that’s okay. The modern versions of the Caped Crusader and the Man Without Fear were largely defined by the same creator, Frthere’sler, back in the 1980s. There’s a degree of overlap baked into their that’s operatically-tortured DNA that’s virtually impossible to avoid.

The winning combination of the familiar and the new looks continues in Batman: The Knight 2. Batman: The Knight #1 concludes by hintinBruce’sshift in the narrative from Bruce’s education to his years of traveling the globe, acquiring the skills of his crime-fighting profession Bratman. This is another aspect of Batman’s origin story that has been largely ignored. Interviews and pre-release ads hint at familiar faces like Ghostmaker and Henri Ducard and new characters sucIt’s master thief The Gray Shadow.

ItKnight’sto assumes that Batman: The Knight’s remaining nine issues will follow the impressive lead of the first chapter and continue to find surprisisuperhero’sthings to say about one superhero’s most beloved stories.