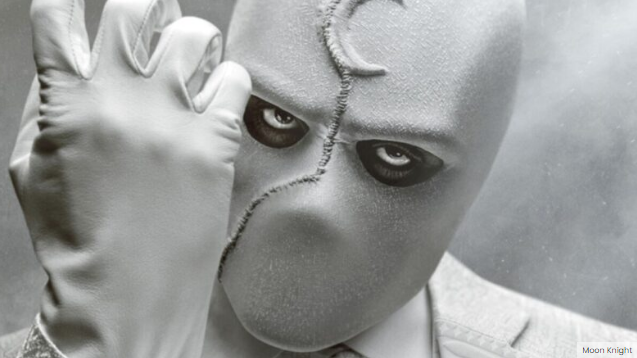 Mark disengages himself from Layla (May Calamawy) to protect her. He then continues his mission, leaving her behind. It is fascinating to see Layla’s interactions with Steven and Mark. While she loves Mark, she cannot stand what he keeps about her. Steven is open and transparent in his love for her. Calamawy is a great Layla. She’s a strong female character that can fight and does it realistically. Mark can rely on her for help in his quest. She’s resourceful and intelligent.

Mark may feel a constant urge to exude machismo. However, Steven’s tussle with Mark doesn’t bode well about what’s happening inside him. He recognizes that he is a broken man and is trying to find redemption from his past actions as an avatar of Khonsu (F. Murray Abraham), the God of Moon – but defending innocents has resulted in more blood on his hands. Abraham is a perfect voice for Khonsu. His voice work demonstrates the anger and petulance inherent in the character.

Harrow was the avatar Khonsu used in the past. This makes us think of a darker side to the Moon God. Harrow’s current mission is definitely a twisted and warped one. Khonsu seems to be interested in the fate of humanity and will not hesitate to chain a person who is clearly not up to the task.

It is especially disappointing that Mark’s mental health issues play against him. Harrow, on the other hand, doesn’t receive the same treatment. Although the Gods may be among us, there is a certain lack in humanity’s care – I have never seen such a lack on the part of a court proceeding. This is the point, I think, to contrast all the efforts of Mark with the apathy Gods.

Mark’s lack of agency and control is continually highlighted. He’s in Khonsu’s service; his body doesn’t belong only to him. Steven has to share it with him. There are times when he does things that he can’t even recall. It’s an incredibly frightening and disconcerting experience. The shocking end of episode four is a shocker. It’s a twist I didn’t see coming and will be thinking about for days to come.

Marvel’s spin-off TV series have been more entertaining than their phase 4 films in recent years – but don’t be discouraged, Spider-Man fans. WandaVision was a unique show that explored grief and the dark abyss it can lead you to. Loki explored sci-fi territory as well as self-love. The Falcon opted for political action TV. All of them were entertaining in their own way and were the real highlight for the MCU 2021.

We’re starting this year with Moon Knight. This is a new story, and unlike the rest, it is starting from a fresh perspective. Moon Knight is refreshing as we have been dealing with the same characters for quite some time.

The series opens with Steven Grant (Oscar Isaac), an expert on Ancient Egypt who cannot respect his boss Donna (Lucy Thackeray). He is forced to sell souvenirs in the museum’s shop. Steven begins to notice that he is losing time and often wakes up in places he doesn’t remember travelling to. Arthur Harrow (Ethan Hawke) is the man who helps Steven to travel on one of his sleep-travelling trips. He’s a member of a cult dedicated to Ammit, known as “the devourer” of the dead. Harrow allows his followers to weigh themselves against Ammit’s scales. If they are found lacking, they will die instantly.

Steven has a scarab Harrow believes will take him to Ammit’s burial site. Much like in The Mummy, Aro has thoughts of resurrection in his brain. Ethan Hawke is a great actor here, despite not having had the chance to play many villains during his career. Although he exudes calmness, we know enough history to see that no form of cleansing can eradicate evil the way he believes it can. His voice is also used to do character work. He can switch between a soft, gentle tone and a more strident tone, depending on the situation. He almost sounds like he has mastered the Bene Gesserit voice technique.

Oscar Isaac’s dual roles as Steven Grant or Mark Spector are the main draws. He is a great actor, playing both Steven Grant and Mark Spector well. Mark is more confident and assertive. Steven is quirky and geeky. Grant’s English accent is a bit dramatic, but it fits in with the show’s tone.

Moon Knight manages all the conversations between Steven, Mark and his wife, using mirrors and reflective surfaces for their dialogue and editing it naturally. Although this show isn’t horror-themed, some of the set pieces are quite frightening, such as the chase sequence at the storage facility and hide and seek with the creature at the burial spot.

Advertisement
Disney+’s Moon Knight Is Off to An Outstanding Start