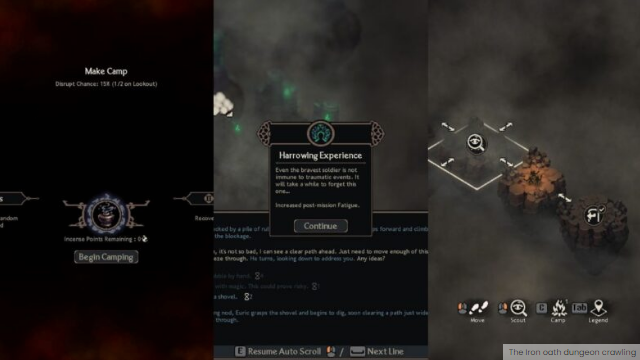 In The Iron Oath, you will likely be clearing many dungeons and caverns as part of your party’s many contracts to earn a living in Caelum. Iron Oath’s gameplay is based on dungeon crawling. They can be dangerous, and it’s essential to prepare before you venture into the unknown.

Everything you need to know about dungeon climbing in The Iron Oath.

Once you have reached your mission location or contract with your company, it is time to form your group that will venture into the dangers. To form your core group, you can select up to four employees from your company.

Once you have chosen your party members, you will be able to buy provisions, items, or expendable gear that you can take into the dungeon. These items can include tools, potions, bandages, and miscellaneous equipment to keep your party healthy or help you solve problems in encounters.

Provisions are a modest amount of gold. However, any unutilised provisions will be partially refunded once the dungeon crawl is over. You start with four provisions slots. These can be increased by company upgrades as your renown increases, and your progress through the narrative and complete contracts worldwide.

Your party can perform four actions while exploring a dungeon. They are moving, scouting and camping. The most straightforward move action allows the party to move from one dungeon section to another. One unit of time is required to perform a move action (more details later).

Scouting allows the party members to reveal the next section in a given direction without moving the whole party. Scouting will reveal the following sections and points of interest, ambushes, secrets and other interesting places that could be of importance to the party—this cost 1 unit.

Camping allows the party to take a break, relax, recover, and prepare for the next adventure. This will be discussed in more detail later. Unlike moving and scouting, the camping action does not cost time units. Instead, it resets the time meter to zero and doesn’t reverse any effects from advancing time.

Finally, any party can use its inventory at any time, even if they are not in combat, to access any provisions you bought for their expedition. Each item in the inventory costs 1 unit.