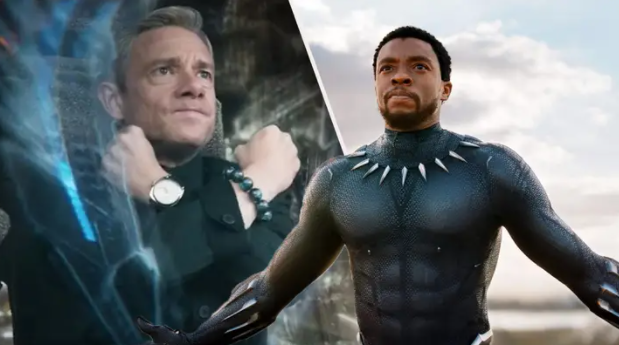 Black Panther is still one of the Marvel Cinematic Universe’s most beloved entries. So it was no surprise that a sequel to this film was announced. Chadwick Boseman, the lead actor, died in 2020 after a long battle with colon cancer.

The film series’ future seems trivial when compared to the loss a life. However, Marvel later confirmed that the sequel would go ahead with the title Black Panther, Wakanda Forever,, and Boseman’s T’Challa role would not be recast. Recently, filming for the sequel came to an end and Martin Freeman opened up about his experience.

Freeman plays Everett Ross in this series. He explains the “odd” atmosphere on set, noting that everyone felt the gap left by Boseman’s absence.

Freeman spoke to Collider and said that it was “strange, that side of the story.” You’re making the movie you want to make. There are scores and scores upon sets, all working together to make this film. There’s no doubt that there is a gap at the core of it all, and you could feel it.

It was enjoyable, with all due respect to Ryan Coogler, and everyone else who sweats and bleeds to get it done right. It was fun. It was very quick. But I like playing Everett Ross. It’s very enjoyable to play his character. […] It was strange. It was strange that Chadwick wasn’t there. He continued, “There’s no way around it.”

It would be a shock to everyone, but life doesn’t end. It’s not as if it’s a rite of passage, and we all just have to move on. I thought that he had passed away, but there were still many stories and great characters to be told in the world. I believe, and I hope we’ve made an excellent film. Ryan Coogler is someone I can trust. Black Panther: Wakanda Forever seems to be honoring Boseman’s memories.