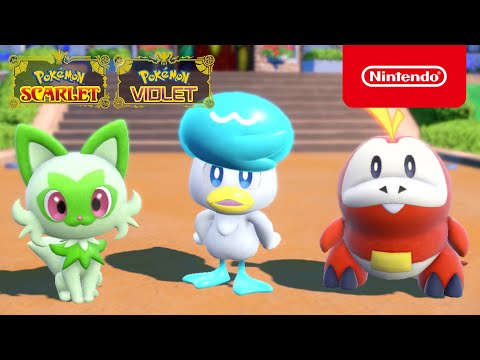 We’re getting a new mainline Pokemongame, as is tradition now. We now know that more information about the game will be available tomorrow.

Tomorrow’s trailer will be available on the Pokémon YouTube channel at 6:00 AM PDT or 14:00 GMT. Although it’s not clear what the stream will contain, we can expect some information about the game’s release date and details on the latest Pokemon to be included.

We were provided information earlier this year about how the game would work, including open worlds with urban areas and open wildlands without borders. We were also given information about the new starter Pokemonfor this game, Sprigatito and Fuecoco. We would choose Quaxly as he is a tiny duck friend. If you chose any other Pokemon starters, then you are factually wrong and an enemy of ours. Because turning down the opportunity to have a small duck friend is confusing to us on a core level.

The stream can be viewed here.

The new Pokemon version is expected to be a hit, particularly considering how beloved Pokemon Legends Arceus was for how it altered the Pokemon format. Although there is no indication that the new Pokemon game will follow the lessons from Arceus’s success, we should know by tomorrow if Pokemon Scarlet/Violet will be closer to the Arceus or more traditional mainline Pokemon releases. The game’s design and play will be fascinating, as this is the second Pokemon Game Freak game in a year. There are also concerns about how busy the team must have been to produce such a fast game.