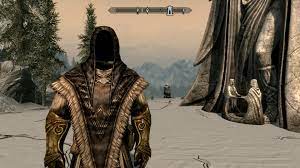 Skyrim’s dragons may have been reduced to parodies, having been transformed into everything from Thomas The Tank Engine and bombastic wrestler Randy Savage to Ohio. However, their priests still command respect.

Perhaps these ancient beings don’t seem too far behind their masters. Players often forget about them as soon as they are defeated and their masks added to the inventory of a greedy Dragonborn.

One modder believes this and has delivered an extensive overhaul to their powerful artifacts.

You can now say goodbye to your face because the powerful mask that you stole is still there.
This mod is called Curse of the Dragon Priests – A Dragon Priest Mask mechanic overhaul ‘. It is the work of grassed, a prolific modder famous for making Skyrim fail its main quest by being slow and adding literal stress.

They’ve put on their dragon priest masks, making the stat-enhancing collectible relics of the vanilla game terrifying and demonic facehuggers that will drive your character crazy.

JoJo’s Bizarre Adventure stone masks loosely inspire these new, improved visages. They will initially refuse to be worn, but then they will clamp themselves to your skin and refuse to be removed via the inventory screen.

You can make any mask more powerful by keeping it on your head for as long as you want. Its enchantments will quickly become stronger than vanilla stats and then move through four levels of amplifying power.

There’s a catch. A small amount of the soul of the defeated dragon priest will remain in the mask and infuse it with “dark energy.” This will have some alarming consequences, such as debuffs for stats at lower levels and the dragon priest taking control at higher levels.

This will result in hard fights against the priest to recover your body. You may also face this if you try to remove the mask via an exorcism using an unbinding spell.

The mask will be released from your face if you defeat the priest in their demonic form. You can then look in the mirror again without screaming.

You can customize many effects the masks produce while glued to your body with the mods SKSE and SkyUI. This allows you to reduce the intensity of things if you feel like you have lost control and are struggling to get your body back.

Get ready for surreal boss battles. Follow us to get more information on The Elder Scrolls 6 and the bizarre world of Skyrim mod.