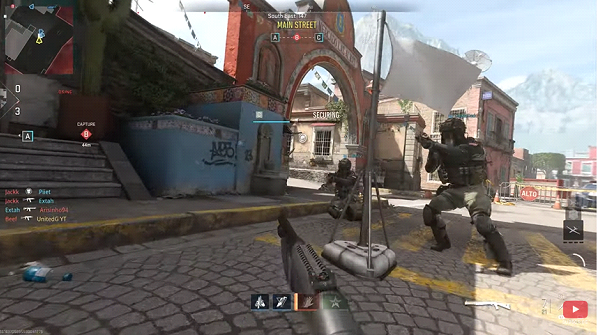 After the release of Call of Duty Modern Warfare 2 Remastered, the game still holds firm to its actual gameplay, placing you in the combatant’s perspective.

Rather than craving survival, finding intel in the game is among the major elements to make the most out of your gameplay.

If you want to learn more tips and grab important tools to play Modern Warfare like a pro, we advise you to go to Battlelog. With that said, let’s jump into the real thing.

Shooting accuracy is vital in COD Modern Warfare 2 Remastered, and so is movement. You can’t be running and shooting, hoping for the best.

Learning how to advance quickly through a map via slides and dolphin dives is essential.

Where you position yourself is important, as it’ll help you live longer in the game. The new expanded vertical movement system allows you to hang off racks without losing your weapon.

You can mantle, parachute, and climb across areas. Always work hand-in-hand with the map.

Playing video games is more enjoyable when you customize your settings. Choose the best and most supported screen resolution. Select the best game sensitivity so you don’t twitch around the game and struggle to aim.

You can go as far as customizing which button on your controller performs which function. You can select a particular button for the recoil function, and so on.

Finding intel makes cheats available for special functions. For instance, the COD Noir turns the color display of your game from colorful graphics to black and white. A Bad Year cheat turns enemies into vehicle wheels once killed.

Some of the cheats in Modern Warfare 2 Remastered make the gameplay comical. Nevertheless, it keeps you playing and exploring more.

Besides your guns, craft loadouts, test them and find the best one. By doing so, your chances of winning battles in the game increase. However, craft what will suit your playstyle.

To make loadouts, navigate to the “Weapons” tab and choose “Multiplayer Loadout.” You can assign specific purposes to them.

You want to make it to the end, so don’t allow the statistics to derail your goal. It’s frustrating to keep dying over and over. However, if you don’t stop looking at your death or kill ratio, you’ll keep dying and respawning.

Focus on making the best out of your gameplay, and as you advance in skills, your stats will also improve.

Unlike other series of COD, the map in Modern Warfare 2 Remastered has numerous ways to give you cover in terms of nature and structure. The map indicates when and where an opponent is attacking from.

Take cover behind buildings, objects, and trees whenever the map signals you. Furthermore, be vigilant as you play. The game attracts many snipers and enemies in ambush, waiting to take you down. Thus, play tactically to win like a pro.

Although streaks are vital components of your loadouts, avoiding them is the game changer. Use the UAV to know your opponents’ position. Once you get a vocal warning about a deployed streak, get away from the area.

On the other hand, once you get a streak, deploy it at the best time carefully; it’ll help you take out a lot of enemies.

No matter how much you love playing solo, you won’t last long in the game playing alone. Team up with other players, play difficult levels together, and communicate.

Sharing ideas can unleash unique and effective ways to beat enemies. If your friends are on the platform, you can play with them. However, you can connect to other players in the gaming community to get fresh and different ideas.

Devise strategic tactics to take out enemies, find intel, enable cheats, and have the best gameplay. Think and act fast.
For instance, immediately an enemy is out, if you think and act quickly, you can take them out before they recoil. To attack a vehicle, target the doors and tires to break it down quickly. So, develop strategies based on the area, the intensity of the attack, and the game mode, to win.

Trying these tips while playing Modern Warfare 2 Remastered will help you do better. Try your best possible to avoid streaks from enemies.

Also, duck and take cover while recoiling. You don’t want to get hit by your opponents. No matter your death rate, focus on enjoying the game. With time, you’ll improve, as well as your stats.