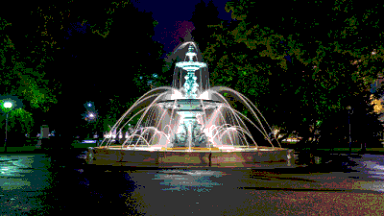 The Next Location in Genshin Impact

The Next Location in Genshin Impact

With Sumeru’s release, Genshin Impact account holders are already considering the following location in Teyvat. Here’s what we know about Fontaine and a possible new subarea to be added.

The Court of Fontaine will open next

Besides its superb combat mechanics, Genshin Impact also boasts impressive environments distinct from each other. Mondstadt’s plains contrast with Liyue’s mountainous cliffs. Inazuma’s islands also have different atmospheres, from Narukami’s spring cherry blossoms to Tsurumi’s mysterious fog. Lastly (so far), Sumeru has a lush rainforest bordered by an arid desert. All Genshin Impact accounts can experience these locations when they play the game.

That begs the question, what kind of location will the game give us next?

That means there are three nations left to explore:

The story preview trailer of the game (Travail) implies that we, the players, will be able to go to Khaenri’ah. That is the nation that got destroyed 500 ago by the events in the game. Also, judging from the story beats, Celestia is a possible endgame location for the Traveler. All that counts 9 major locations players can have adventures in.

From the patterns of the previous patches, every X.0 update will release a new country.

The mentioned trailer obscures it, but going by the pattern, 7.0 would introduce Khaenri’ah and 8.0 Celestia. Of course, this is speculation, and HoYoverse could add other locations between Snezhnaya and Khaenri’ah/Celestia.
Still, the nation next in line is Fontaine, and this will be the following prominent location the Traveler will journey to.

What We Know About Fontaine

From the few Fontaine researchers and NPCs we meet, we can infer a few things about it.

Interestingly, Fontaine has many references to Bioshock. Aside from the direct connection to Frank Fontaine, there’s The Fountainhead, another inspiration for Bioshock. The Steambird could allude to the Songbird, Elizabeth’s mechanical bird bodyguard. Rapture is an underwater city, while Fontaine is the seat of the Hydro Archon.

The primary real-world inspiration for the location is France, though it could also have a bit from the UK and/or Italy. Its Archon’s ideal is Justice, which puts lawyers, detectives, and even the mafia in mind. The greatest detective in fiction is Sherlock Holmes, who hails from 22B Baker St., London, which gives us the UK influence. Besides the mafia ties, water also reminds us of Venice’s waterways. That could be another inspiration to Fontaine, the nation of Hydro.

We could expect steampunk designs, judging from the toys from the Core of the Apparatus Event. The description of the streets of iron and technological advancement also implies it. However, we can only wait until it appears next year. Since its release is still that far away, we only get slight hints about it. Besides, Sumeru is practically fresh out of the oven, so it’ll take some time to bake Fontaine (metaphorically speaking).

In a More Immediate Sense

Usually, HYV releases subareas for the most recent or past locations. Examples include Dragonspine (1.2), Tsurumi Island (2.2), Enkanomiya (2.4), and The Chasm (2.6). During the 3.1 patch, the first desert area of Sumeru is released. The map suggests a second part of the area to the north.

Looking at that side from the Dune of Carouses Waypoint reveals a tornado. Past the darkening of the screen near the border, it also seems to create sandstorms over the area. It implies that the Traveler will discover how to stop it later. It could be similar to how they calmed the Mausoleum of King Deshret after a specific quest.

Also, if you’ve done the Aranara Treasure Hunting (through pictures) quest, you’ll find some images that are labeled as inaccessible for now. Though you can as easily infer that it could be a different location than the desert, the pictures being part of some oasis in the desert is still more likely.

This is possibly the next area to be released. Inazuma had a gap update before it added the new subareas, but it could be longer for Sumeru. Leakers speculate that this patch cycle could go up to 3.9, but that information is subject to change. After all, the 1.0 series ended at 1.7, and 2.0 stopped at 2.8.

It could mean the subarea release distribution could have wider gaps, so theoretically, the second desert area could be in patches 3.3 to 3.5. 3.1 opened the Great Red Sand, so 3.2 would be a break from releasing another subarea.

Fontaine may be the next central area of Teyvat, but with Sumeru fresh off the press, we still have a long wait. We have a lot of unfinished business in Sumeru, and we have to finish those before we can think about Fontaine.

Also, since there’s no Genshin trading, there are lotuses, fruits, and scarabs to collect for ascending characters. After that, it’s farming artifacts and talent books. Many quests and hidden exploration objectives are also waiting for you.

Advertisement
The Next Location in Genshin Impact