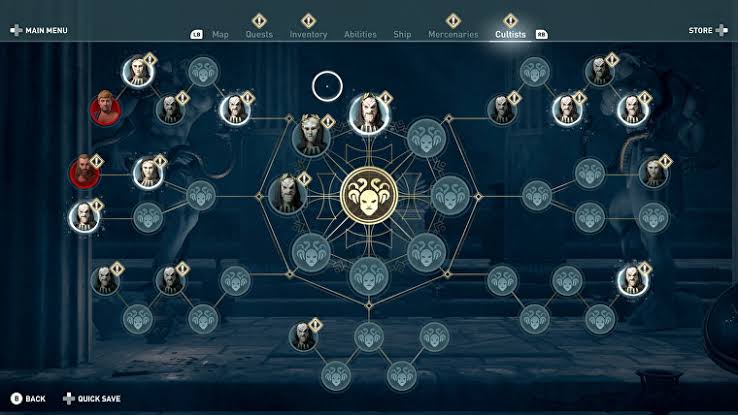 There are 42 cultists in Assassin’s Creed Odyssey. Slaughtering all cultists and ousting the faction will open “The Cult Unmasked” trophy or accomplishment. This guide gives you where to discover every one of the cultists.

Thrashing every one of the Cultists of Kosmos.

The cultist menu is naturally opened in Sequence 3. By then you will have just murdered two of them naturally through the advancement of the story. It is prescribed to initially complete the fundamental story (every one of the 9 scenes) and afterward chase down the missing cultists.

The explanation is that you can execute some of them simply after the story.

References to cultists are explained

Normally you would have to kill a cultist to get a clue where to find the next one. The cultist menu will show you the hints for each one. The hints are different, they can also refer to side quests or you can find cultists in certain regions through conquest struggles. This guide shows you all the cultists and their location! The cultists who are tied to side quests are the only exception, for these NPCs you must first play the associated quest. The inner-circle cultists can only be revealed after everyone else in thebranch has been killed. After killing 41 cultists, the spirit of the cosmos leader is revealed.

If you are looking for a complete overview of all trophies and achievements or other puzzle solutions, here is our Assassin’s Creed Odyssey 100% Walkthrough.

Elpenor: Kill her automatically. In the video at 00:05.

Sotera: Fortress of Megaris, usually around the docks or on the right side of the fort. Use your eagle to search for it. In the video at 01:57.

The Master: If you play the side quest “A Life’s Worth” in Attica, you have to complete all Socrates side quests. Then you will find it in the south of Attica, between the high-speed point “Tower of Sounion” and the Silver Mountain. In the video at 08:52.

Hermippos: You have to do all the side quests in Attica to find this cultist. In the video at 05:24.

Nyx the Shadow: In the southeast of Attica. Use your eagle to search for her. In the video at 09:55.

Epiktetos the Forthcoming: Kill her automatically.

The Chimera: Andros Island, on the southern edge of the island.

The Centaur of Euboea: Euboea Island.

The Silver Griffin: On the small island southwest of Mykonos, called “Prasonisia Island”.

Machaon the Feared: This cultist can be found in the Achaia region (Mount Panachaikos).

Poleman the Wise: In Achaea in the temple.

Brison: In Attica on the island, marble quarry Salamis.

Podarkes the Cruel: Complete Side Quest “Trouble in Paradise” on the island Mykonos. This unlocks a follow-up quest “Hades, Meet Podarkes”. You will have to kill Podarkes during that quest.

Rhexenor the Hand: You meet this cultist automatically in sequence 8.

Kodros the Bull: You Kill him during the Side Quest Chip on Your Shoulder, Chios Island

Kleon the Everyman: You meet this cultist automatically in sequence 8.

Heroes of the Cult Cultists

Pallas the Silencer: Conquest battle in the Achaia region. You have to fight for Athens (blue flag). Athens must be the invasion army (Sparta must have control of the region).

Deianeira: You meet this cultist automatically in Sequence 7.

Belos the Beast of Sparta: He is the second champion in the Pephka Arena.

Okytos the Great: Temple of Poseidon, south of Attika.

Exekias the Legend: Achaea region, Olouros fortress. You can only fight him if you have defeated the other cultists in the branch.

Worshippers of the Bloodline Cultists

Harpalos: On the island of Keos (pirate islands).

Diona: Kythera, play all the side quests of Diona.

Chrysis: Argolis, Death Comes to Us All Side Quest

Gods of the Aegean Sea Cultists

The Mytilenian Shark: You find him on a Ship, between Samos island and Kos island. The clue for this one is hard to find, underwater location north of Thera, you must dive and recover it from a chest underwater.

Melanthos: He is on a ship patrolling the west of the island of Messara. The ship is always on the move, but always in the same general area.

The Octopus: It is located on a pirate ship that crosses between the largest island in the lower right corner of the map (Messara) and the island north of it (Thera). The ship is also called “The Octopus” and has a golden crown symbol.

Sokos: On the island of Melos, southeast of Argolis! Melos belongs to the Obsidian Islands.

Asterion: He’s on a ship between Skyros and Andros. His ship is also called “Asterion” and has a golden crown symbol.

The Hydra: He is on a large ship with red sails in the water in the lower left corner of the map. The ship is also called “The Hydra” and has a golden crown symbol.

Skylax the Fair: He is the leader of Euboa. Its locations vary, depending on the attachment status of the region. If the region is fully fortified, it is heavily guarded in the leader house. He can also sit under a tent in the wilderness. If the region is weakened, he will walk alone through the city. You can discover it (unlock it) by plundering the Treasury from the fort in the Lokis region.

Lagos the Archon: You meet this cultist automatically in Sequence 7.

Callias: You must Play the Olympic Quest Series (On Gold Course Success) to kill this cultist.

Silanos of Paros: You meet this cultist automatically in Sequence 7.

Pausanias: You meet this cultist automatically in Sequence 7.