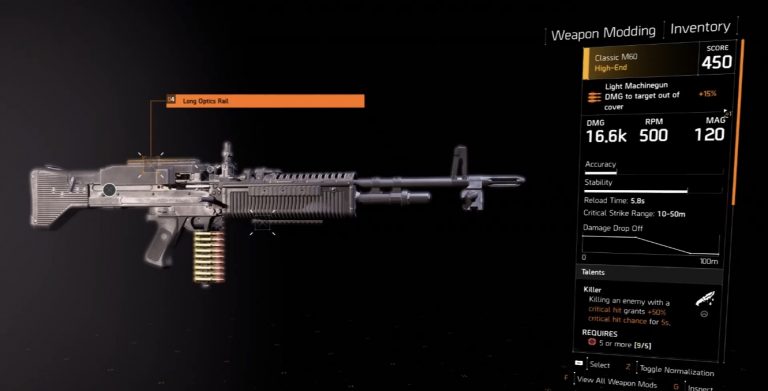 The Division 2 has 70 unique weapons which have further varieties. In case you’re making some hard memories making sense of what weapon is directly for you in The Division 2, this article can enable you to out. After you get your hands on these weapons, you’ll be smashing everybody who falls in your observable pathway. Additionally note that we’re concentrating just on the standardized details of each firearm since that is the one utilized in PvP mode. The details will shift for sequential level weapons or in the event that you utilize various mods in PvE. We’ll be indicating the Tier 4 rendition of every weapon to show their present greatest potential. Here’s out guide for the main 5 best weapons in The Division 2:

The Model 700 is easily one of the best sniper rifles in the game according to players since it has the highest damage in its class. The only downside to this bolt-action rifle is that it suffers from a low RPM of 54, but it makes up for it with a damage rating of 53015! If you play your sniper build correctly and use long range to your advantage you’ll be mowing down enemies without taking much damage. An alternative to this which players recommend is the SVD which deals 21830 damage per hit, but 94597 damage per second. 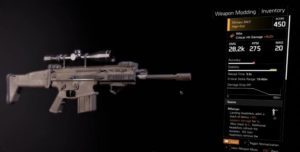 The Military Mk17 is another single firing weapon and has become a staple in many builds across The Division 2 community and is regarded as on of the best guns in the game. Not only does it look good, but it has great overall stats. The weapon does decent damage at 17463 for a sniper rifle which means you’ll drop enemies in 4-5 shots. Couple that with a base RPM of 275 and a magazine size of 20, it becomes even more deadly. This translates to a DPS of 80039 meaning you’ll shred opponents like paper while sitting comfortably at long range. Also a noteworthy alternative to the Mk17 is the Classic M1A and is preferred by some players for its accuracy when used with stability mods. 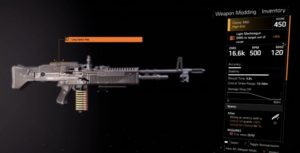 The next best gun on our list is a fully automatic weapon, the Classic M60 LMG. Its regarded as one of the best machine guns in the game by seasoned players on YouTube and Reddit. If you’re not a fan of LMGs or don’t like that style of play, this might be the gun to convince you to think otherwise. The Classic M60 has an extremely fast base rpm of 500 and the largest base magazine of any LMG at 100. It deals 8732 points of damage per shot and a whopping 72767 damage per second. So basically you can mow down hoards of enemies with this beast of a weapon. 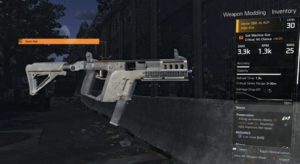 The second best weapon on our list is an SMG that needs no introduction, the Vector SBR .45 ACP or 9mm version. Its one of the most used weapons in the game and is a vital part of the meta. Whichever version you get your hands on, you can dish out 3742 normalized damage which is decent for an SMG. The .45 ACP and 9mm have a mind blowing 1200 RPM and 25 or 33 magazine size respectively. The Vector deals 74840 DPS and coupled with critical-hit focused mods, it is lethal. With either of the two you’ll be destroying enemies in an instant at close ranges. Generally when looking at the tiered versions in PvE, players have preferred the .45 ACP for its greater RPM. However, the 9mm is on almost par with its higher damage potential at Tier 4.

The last weapon on our list and arguably the best gun in The Division 2 is the P416 Assault Rifle. Not only is it pleasing to look at, but it checks all the boxes. Its a strong versatile weapon that can be used successfully at different ranges. The P416 has pretty decent RPM at 750 which means it shoots faster than some of the SMG’s in the game. Also it does 6237 damage and deals a massive 77963 DPS making it one of the best in its class. The base magazine size of 30 is decent, but can be raised to 60 with extended mags. If you can get the Tier 4 P416 and add critical hit or stability mods you have the best weapon overall and it easily takes the top spot as one of the best guns in the Division 2.

Let us know what are your favorite weapons in the comments section below. Check out our other articles here for more news, guides and helpful tips on The Division 2.