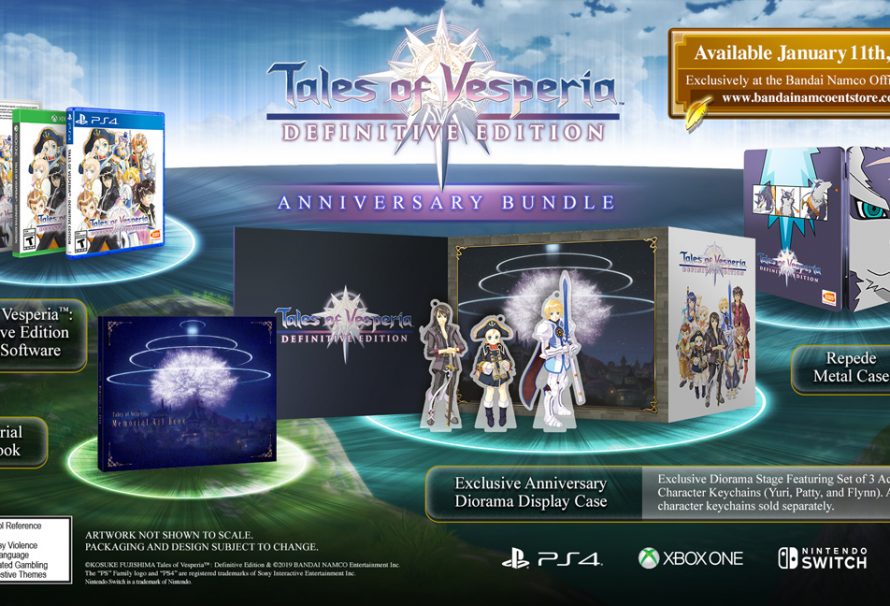 As we are approaching the arrival of Tales of Vesperia: Definitive Edition, Bandai Namco declared today that the game will get a Limited Edition for both North America and Europe.

For those in North America, there will be an Anniversary Edition that will retail for $99.99 and will incorporate the accompanying:

Southeast Asia and European territories will be getting a Premium Edition that will retail for $69.99 on PS4 and Xbox One, $79.99 on Switch. The following will be included:

In Southeast Asia, only the Premium Edition will  be available for PlayStation 4.

Follow Yuri Lowell, a resident in the Lower Quarter of Zaphias and former Imperial Knight, as he accepts a mission to retrieve a stolen Blastia Core used to regulate his neighborhood’s water supply. This simple mission spins into a series of events that finds Yuri befriending a colorful cast of characters, traveling to exotic locations, and being pushed into the middle of a nefarious plot that threatens the destruction of the entire planet.

TALES OF VESPERIA: Definitive Edition features two new fully playable party members for North America; Patty Fleur, a young pirate searching for her lost memories, as well as Yuri’s rival and best friend, Flynn Scifo. Along with these two new playable characters, TALES OF VESPERIA: Definitive Edition will include additional scenarios, locations, and costumes that will be all-new for Western players.

TALES OF VESPERIA: Definitive Edition uses a specialized version of the TALES OF series’ Linear Motion Battle System for combat. Players control a single party member in real-time combat while the other three party members are controlled by a customized set of A.I. commands. Players can swap between the four characters at any time during battles and can perform both physical and Mystic Artes attacks.