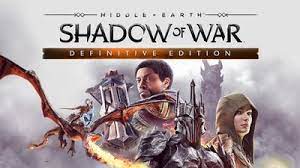 Experience an epic open-world brought to existence from the award-winning Nemesis System. Forge a brand new Ring of Power, conquer Fortresses in enormous battles and dominate Mordor along with your Private Orc military at the Definitive Edition of Middle-earth™: Shadow of War.

Nemesis Expansions incorporate a fresh Orc Tribe featuring new missions, stars, followers, skills, weapons, Fortress, and rainforest upgrades, along with a Legendary Gear Set. Story Expansions present a brand new playable character & skills, narrative campaigns, side missions, enemies, allies & much more. Set between the events of J.R.R. Tolkien’s The Hobbit and The Lord of the Rings, adventure an epic open universe brought to life from the award-winning Nemesis System. Players have been chance to wield a brand new Ring of Electricity and face the deadliest of enemies, such as Sauron and his Nazgul, in an enormous struggle for Middle-earth.