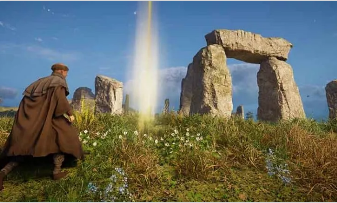 A discovery tour was included in every Assassins Creed title. Assassins Creed Origins and Odyssey had their Discovery Tours. These tours took gamers back in time to Ancient Greece and Egypt and showed them the history, real-world locations, and events that inspired the Assassin Creed game.

Assassin Creed Vahalla has the same feature, allowing you to live the actual-life characters, events, and locations that dominated the Viking Conquest.

Like the other Discovery Tours, the Viking Age was created alongside Viking historians, archaeologists, and other historical professionals. The Discovery Tour Viking Age was also produced by historical bodies from across the United Kingdom, Scandinavia, and Denmark, such as the Yorkshire Museum Trust and The British Library, The National Museum of Denmark, and many others.

Hampshire Cultural Trust is the main partner. It has 23 museums in its portfolio, covering most of southern England. This is the area where Alfred the Great lived. It is also the location of many of the stories about the Vikings in England.

Good news! The Assassins Creed Valhalla Discovery Tour Viking Age DLC will be available for free on October 19. The DLC is available for everyone who owns the game. It will cost you $19.99, EUR19.99, or PS16.99 if you prefer the standalone experience.

You will need to wait if Discovery Tour Viking Age is available on next-gen consoles. Only PC players will be able to download the October 19 update. You will have to wait until early 2022 to play on other PC platforms and consoles.