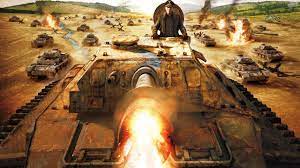 R.U.S.E. R.U.S.E. The Art of Deception North America is a strategy video game that Eugen Systems developed and published by Ubisoft. R.U.S.E. takes place during World War II. The story is told through Joseph Sheridan, an American Army soldier. Sheridan, a Harvard dropout, joins the U.S. Army and eventually controls the First Armoured Division. In 1945, General Sheridan liberated Colditz Castle to release an undercover operative code-named Nightingale, who could identify the identity of Prometheus, an Axis informant.

Sheridan then reflects on 1943, when he was a major in the Allied North African Campaign. Leaked information resulted in devastating Allied losses at the Battle of Kasserine. Sheridan meets Colonel Andrew Campbell, a British intelligence officer, and they work together to reverse the tide of war, despite Sheridan’s inept commanding Officer, General Weatherby. For his efforts, Sheridan is promoted to lieutenant colonel.