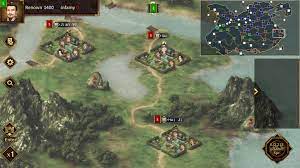 It is fully 2D. This allowed for a wide range of mechanics, possibilities and locations to be incorporated into the game, without requiring a lot of system resources.The traditional Chinese graphic and musical styles are used.

You have the option of choosing from many scenarios at the beginning, or you can make your own using a flexible editor.The main goal is to increase its capital and strengthen its authority.This is possible with many options.

There are many micro-management options available in the game. These include city management, recruiting officers, searching for and deploying troops, and collecting, equipping, and maintaining troops. You can also conduct hostilities, trade and diplomacy.There are hundreds of traits that can have an impact on the character’s attitude or effectiveness in certain areas.

Battles are held on different maps.They can be divided into two types: sieges or battles on ground.It is the commanders’ skills that determine the actions that troops can perform.

There are many ways to win: defeat all enemy troops, kill the commander, or during an assault break through to the main square, and lower the enemy flag.It is important to remember the state of the soldiers. A soldier who is hungry or depressed will most likely flee the field.

Three Kingdoms:The Last Warlord requires that every detail be taken into consideration. This makes it quite difficult to achieve a productive development.

How to install Three Kingdoms: The Last Warlord Game