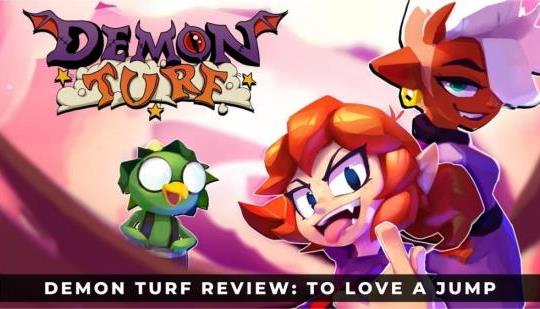 It can be difficult to stand out among all the current games available. It’s even more difficult when you consider the many genres, experimentation and evolution of the industry. This makes it difficult for players to decide what kind of “identity,” they want, when it comes down to what type of game they like. Some people enjoy more relaxed, unstructured experiences like Animal Crossing. Some people are more determined and seek out challenges such as Demon’s Souls. Titles such as Demon Turf need to be able to communicate their personality and attitudes when it comes to establishing their hook. It does this with an earnestness that transcends its indie status.

It also does something completely new, if that is not enough! (Kind Of.) Demon Turf can be instantly identified by its dimensional distortion. It mixes a 3D world and 2D characters. It adds an extra layer of challenge due to its platforming prowess. As a Nintendo platformer aficionado, I can tell you that it will take a lot of foresight. This game promises a unique style and challenging platforming challenges. It is easy to recommend, but not so easy after hours.

One plays Beebz, a demon child who is openly challenged in a dream by the Demon King. She will need to use her natural abilities to navigate her way through maze-like levels full of dangers, baddies and other obstacles.

She wakes up and decides to take on the Demon King . Many are shocked that Beebz can pose a threat at her tender age of one thousand. She is determined to continue her journey, with the assistance of Midgi, her comrade and, much to Luci’s dismay, a servant of King.

Demon Turf isn’t a story that will have a significant impact on the overall worth of the entire project. It’s fairly straightforward in execution, and a bit light on details (most NPCs only have one or two lines maximum). However, it’s a useful tale of ambition from an unanticipated source. A ten-year old is going to stop an organized crime ring and become the Pokemon Champion. This is the kind of thing. It subtly evolves after each world is completed, but there’s not enough to keep one interested.

To make progress, collect the candy!

Characters fare better. Midgi can be a bit pompous, but he knows the role of “sidekick”. He is a tremendous supporter, and in a childish way, helps guide Beebz and the player through the game. Beebz is a strong, independent girl who doesn’t shy away from a challenge and never gives up. Video game characters can be a lot more confident than they realize. Beebz is an easy-to-like lead, even though she speaks very little without being spoken to. Her sassiness has the advantage of occurring when it is needed to without being too overt.

The cracks beneath Beebz’ persona are what is most fascinating. Although her confidence is not always apparent, it’s evident that she has lost some of the confidence she used to have. She cares about how others perceive her and the support she gets from them. The journey has a transparent layer of sentimentality that can elicit some surprising wholesomeness. It can be quite sweet for a game so deeply ingrained with demonic imagery and set pieces, laden with imposing threats that spit out venom, and champion unquestionable dominance,

This section will be quick and to the point: If you like platforming, Demon Turf is for you. End of review.

Despite the jokes, this game’s strength is its platforming challenges. There are many levels that relate to the environment and encourage speed and experimentation. It rewards speed with a trophy for completing stages quickly. Although initially overwhelming, the game allows the player to explore the possibilities of level layout.