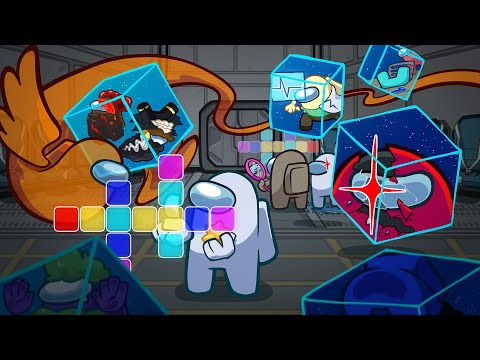 InnerSloth really pushed the limits of how much news one can fit in five minutes during an emergency crewmate meeting tonight. You might be expecting a brief update. This is the entire Among Us Cosmicube update.

Update from Among Us Cosmicube

You might want to re-enter the lobbies of Among Us if you’ve been expelled from them in the past. InnerSloth has announced a huge update to their game, the Cosmicube. This will change everything you thought you knew. Seems fitting.

You weren’t the only one who thought the update video was a Kevin the Cube/Fortnite crossover. Although rumors are still flying, it’s not true. Instead, Cosmicubes can be described as achievement paths! You’re correct, achievements are now in Among Us and Cosmicubes offer a whole new world for Among Us advancement.

It’s difficult to know where to begin with the update news. Everything is interconnected. However, cosmicubes take us to Beans and Stars which are the new currencies among Us. This is only a fraction of the intense five-minute announcement video.

Beans are an in-game currency that can be earned by killing crewmates, completing tasks and correctly guessing how sus your crewmates. Beans will allow you to purchase cosmetic items in the new in-game store, as well as Cosmicubes. These are sort of mini battle passes. The Polus Cosmicube, for example, can be unlocked at 3,000 Beans. As you complete Polus challenges you will unlock new cosmetics. Does that make sense?

InnerSloth, I am joking about my subheading. It is true that I believe you want the game to be better. Game devs’ time ain’t free, after all. Stars are the currency of the Among Us. Stars can be used in conjunction with Beans to purchase exclusive cosmetic items and Cosmicubes. The Airship Cosmicube, for example, cannot be unlocked by Beans. It will cost you 90 Stars instead. You will be able to unlock more adorable hats as well as new accessories for your visor.

I now turn my attention to crewmate cosmetics. The adorable little hats and pets of Among Us have been a great way to play in InnerSloth’s social deduction game. As we waited for the ship to dock, they kept us all entertained with hilarious screenshots and a fight with our friends about who will get the red skin. Crewmate customization has reached a new level. There are now so many options to buy and earn items, including the new visor accessories.

That’s it for part one of the Among Us Cosmicube Update. It was quite a lot and it is very brain-melting. It’s like standing too close to the Polus lava thermometer.

Among Us has new, game-changing roles

Forget about Among Us, as you loved it once upon a time… The next amazing announcement will change everything. This is the new. Roles

This update may not be right for you if you have struggled enough to plead innocence with only two roles. You can be ejected from being helpful by taking on four roles.

The Scientist will have their own vitals machine that they can access from any place on the map. You can see if someone has been taken out. Although I don’t know how useful this will be, it will allow you to catch the imposter or determine their location at a particular time.

Engineers will have access to vents. Yes. This is a good idea, but it’s not going to make your crewmates look stupid and give you excuses when you catch them out. It can’t all be bad, right? Engineers are able to travel quickly across the map, potentially catching people red-handed. This is especially true when doors close.

The Shapeshifter role is fairly self-explanatory. You can assume the role of a Shapeshifter to help another crew member. Maybe a friend you just killed or someone you want to take responsibility for. This is a great opportunity for imposters, especially those who are bad at timing and get caught.

Finally, an important new role that doesn’t help the Imposters. The Guardian Angel, the majestic protector angel. This role is awarded randomly upon death and allows you protect your remaining crewmates. Guardian Angels can protect a crewmate from certain death. This, erm… kinda stuffs up the Imposter. You can reach the big, red button as long as you are able to do so in time.

Hee! That’s it! For those who are unsure, the announcement video is five minutes long.

Time for the Among Us Cosmicube update

The Among Us Cosmicube update has gone live, believe it or not. It’s possible that someone pressed the button during the announcement. InnerSloth doesn’t seem to like to give us much notice.