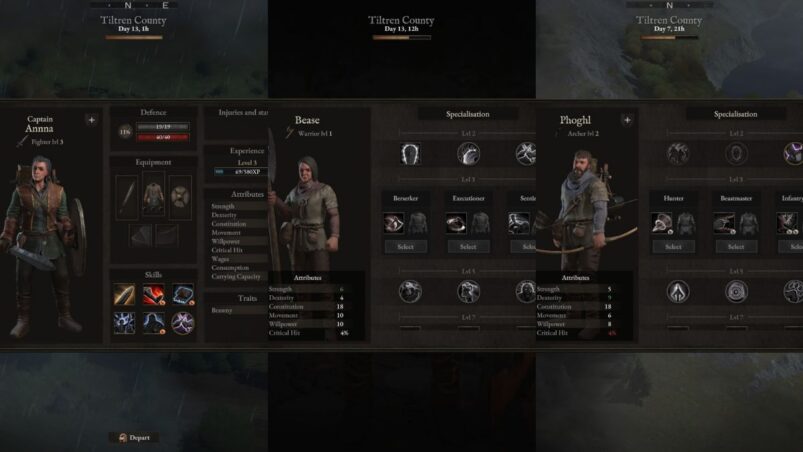 Every successful mercenary group in WarsTales depends on its companions and their ability to survive and persevere. A company can only succeed if its characters work together to achieve maximum results in battle and on the strategic maps. The first step to a successful career in mercenary is understanding the strengths and weaknesses of each class.

These are the main character classes of WarTales.

Here’s all you need to know about WarTales classes.

The Ranger is the ideal light-footed hit-and-run class. It focuses on speed as well tactical flexibility and precision critical damage. This class is also known as the flanker. Characters of this type are more inclined to avoid enemies until they become engaged and move in for a decisive blow. Their preferred weapons are knives, daggers and short swords.

Rangers might appear to be the stereotypical assassin-type character. They can do more than deal overwhelming damage. Rangers can double their ambush or take on support roles on the battlefield, such as a smoke grenade ability and a poison vial for larger enemies.

Archer characters act as the party’s overwatch or ranged support. They can reach targets far away and alter battle lines in many ways. Despite the ranged fire’s apparent lethality, Archers play a more utility or support role in WarTales than some Ranger subclasses.

These bow-armed friends can be used to create favourable engagements for close quarters classes. They can use push-back shots or send trained animals to distract and hit multiple enemies within a given area. Archers, like the Ranger, prefer to be loose and flexible when maneuvering to favourable positions once the enemy threats are pinned down or neutralized.

Use ranged weapons and friends in the line of fire with caution. Any unit that is in the path or reach of an arrow could be hit.

Brute characters represent the party’s brawlers. They want to get into action as fast as possible. Brutes are the charge leaders because their weapons and abilities can cause the most damage to enemies within proximity. However, if they have the right equipment and subclass, they can also duel with single targets. This class is fond of blunt weapons of all kinds.

With their powerful strikes that can hit multiple entities at once, the Brute’s bludgeoning weapons fit perfectly into their role. You need to be cautious when choosing the Brute’s attack area. They can also hit friendly members of your party, just like the Archers bow.