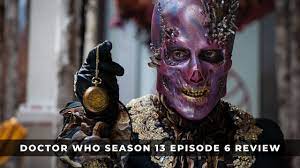 Because they must wrap up all narrative threads, endings can be more difficult than beginnings. Unfortunately, the Doctor Who Flux storyline had far too many threads before Episode 6, Season 13, aired.

There are so many stories and characters to tell, sixty minutes is not enough time to finish the Flux. The Doctor is the only one who gets any character development or focus. There are also some enjoyable aspects to the episode. This Doctor Who Season 13 Episode 6 review will discuss everything bad and good about The Vanquishers.

These are the reviews of each episode of Doctor Who Season 13.

Doctor Who returns for a special New Year’s Eve broadcast on BBC One (UK), and BBC America (US). All thirteen seasons are available on the BBC iPlayer UK.

TABLE OF CONTENTS1 Story – Could the story be repeated for the back?2 Characters & Performances- This is the Doctor’s world. We’re just all living in it.3) Editing and Pacing – Too much trimming4) Cinematography, Sound – Victims to editing

STORY: COULD YOU PLEASE REPEAT THESE IN THE BACK?

The problem with Doctor Who Season 13 Episode 6 is that there is just too much to appreciate each character and arc.

By removing her conversion plate, the Doctor attempts to escape harm from Swarm or Azure. This allows her to be split into three separate people. She can now live on the Lupari ship alongside Bel and Karvanista, in Williamson Tunnels together with Yaz, Dan and Professor Jericho, as well as with the Ravagers aboard Tecteun’s ship. This clever way allows The Doctor to be part of almost every scene. This adds relevance to every story. It’s rare that scenes feel disconnected from the action. It’s even more fun to watch Jodie Whittaker’s Doctor interact and joke with her. This is something that’s usually reserved for specials such as Day of the Doctor.

Perhaps the Sontarans are portrayed less menacingly. Their invasion is not a serious threat to the community and they are mostly played for fun. This corner shop scene is enough to make me laugh. It’s just the right amount silly to see a Sontaran stuffing himself with chocolate. The Grand Serpent is the real villain. Survivors has so much dedicated to The Grand Serpent’s U.N.I.T storyline. He acts as an avenue for the Sontarns invade Earth. Craig Parkinson is an excellent actor and The Grand Serpent can be a good villain. However, he doesn’t have to be in the Flux. It would be possible to cut his character and allow the story to flow in smaller parts.