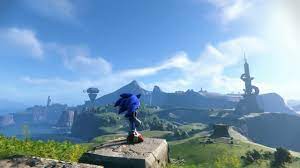 During the 30th anniversary live stream, a new Sonic video game was revealed in May 2021. The new game was initially named Sonic Rangers. The game was revealed at The Game Awards as Sonic Frontiers. It is being developed and produced by Sonic Team and Sega.

A brand new trailer was released to announce the game. The trailer shows Sonic running through the forest before stopping at a cliff where open space is revealed.

This trailer showcases some stunning scenery and gives us an idea of what we can expect from the first Sonic video game that features open-world gameplay. Starfall Islands is the location shown in the trailer. It seems to be a varied biome that offers plenty of exploration and gaming potential. It has tall structures, vast grasslands, rivers, and lakes.

Sonic Frontiers will be released in the latter part of 2022 for PC, Xbox One and Xbox Series X/S.