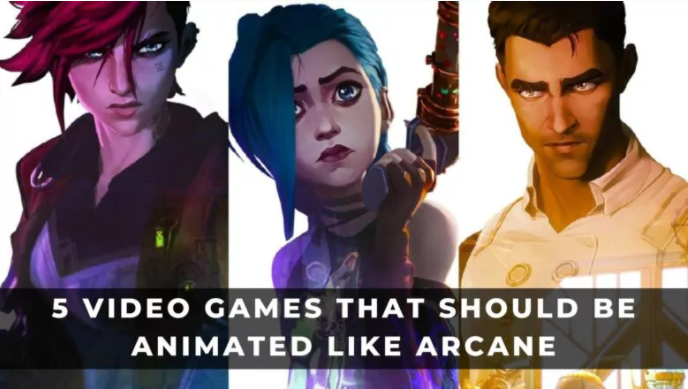 Arcane by Riot Games and Fortiche Productions dispelled the myth that all video game adaptations would fail. Amazing animation and exceptional writing helped bring the League of Legends property in front of new audiences. It demonstrated the potential of gaming IPs in another medium and got me thinking about what else could be done. I started to wonder about animated video games like Arcane.

In considering the League of Legends adaptation, there were a few strengths that I identified. It presented its story visually in new ways, and it had high-quality animation. It had an extensive lore library to draw on, and it didn’t just adopt the game’s existing narrative. It was aware that it could not recreate the essence of the gameplay. Instead, it focused on its strengths and told a story that the game could not.

At first, I was unsure if this would make a good addition to the list. Netflix is already working on a live-action series based upon the Ubisoft title. The historical realism and visuals may not translate well to cartoonish Arcane. But I quickly realized that it would not be a bad idea to alter the visuals, possibly with anime art drastically.

However, I believe the most appropriate style is used for Assassin’s Creed Chronicles. Each region of the game had its own stylistic choices, historically and geographically, from 16 the-century China to 19 the-century India and Soviet Russia. It reminded me a little of the visuals for the upcoming Spider-Man. Every universe is unique in its presentation style, and I believe Assassin’s Creed has the same potential.

It is important to consider the available lore when choosing games that should be animated, such as Arcane. The historical series about the Assassins and Templars contains many stories beyond the mainline games. Fans don’t want an animated version of the Ezio Trilogy. These stories are already covered, and animated series will likely not provide a shorter version. The series has used all of history as its playground. It would be easy to create a completely new story in a setting that was never before seen. It wouldn’t be necessary to separate it from the references to the games. It would not stop the series from creating stories that video games simply have more time for.

The series can be successful as long as it isn’t like the movie.

Hadesimmediately came to my mind when I was considering stories that already have impressive visuals and are ripe for adaptation. Supergiant Games’s roguelike made the most of its limited camera and created a stunning title. It’s an eye-opener, from the various areas of the Underworld to all the colorful characters. You could adapt it into either 2D/3D as the game frequently takes advantage of both.

Because of the limitations of the game, I would like to see such a series with the Arcanetreatment. Although the game’s camera was limited, it made good use of it, and most interactions are static. The impressively long script of the game is communicated with stellar voice acting but almost no animation. It would be great to have a closer look and more visuals. The story is beloved by many, and the game won a Hugo Award in 2021 .

It would be difficult to adapt this series without keeping the original story in mind. Feels like a one-shot. Without prior knowledge of the game, it would be difficult to create a prequel or sequel. The Arcane should also be possible to stand alone. It would be more effective to tell the story of Zagreus than to deviate. However, this should not distract from the importance of presentation. The rooms in the Underworld might change dramatically with each episode. All of the character interactions could also be performed with more body language, and environmental interactions. I envision a mix of slice-of-life and exciting action.

Star Wars is a great example of how the concept can work. The animated franchise has a long history, with Star Wars Rebels continuing the story after Order 66. These shows provided more insight and expanded on the film’s aspects than was previously possible. So, I think the time of The Old Republic and its lore would make a great inspiration.

Fans might instantly think of an animated version of the Knights of the Old Republic when I mention Bioware. This would not be the best way to adapt. Due to the fact that it was a narrative-focused title, the story was told well enough. The game’s major twist is well-known at this stage, which would reduce the tension in the series. The Knights of the Old Republic remake is currently being developed. This could lead to the fandom becoming over saturated with this story.

Rich lore that isn’t too dependent on existing stories would be most beneficial for games like Arcane. The MMORPG Star Wars could be a better source of inspiration. Although there are many stories to follow, the most valuable asset of the game is its setting and characters. Similar to the Clone Wars ,I see an anthology series that explores the Old Republic. It would make MMOs more accessible for players, as they can be difficult to access for some.