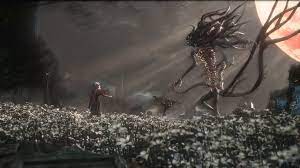 Lilith Walther is an amazing game developer who has decided to give Bloodborne a fresh look. This one takes the popular 2015 horror action RPG and reduces it to 256×448 to be 640×480 pixels. Bloodborne was a cult-classic game that became a hit from its 2015 release.

It received all the attention and love of the gaming community. It has also been a favourite of Lilith Walther (a game developer who has worked hard to make Bloodborne a PS1 demake)

Before we dive into the new Bloodborne PS1 Demake, you may be wondering what a demake is? If the name wasn’t clear enough, a demake is a process that takes modern games and reduces them to appear as though they were released in the 1990s. Some people will take older games and make them modern, just like Black Mesa did with Half-Life.

People also enjoy the retro look and feel of PS1 games. Many people prefer the original low-poly version of certain genres, particularly horror fans. Some indie developers create PS1-like games. Sometimes the lower poly and texture style can make the game more immersive and frightening, Chasing STatic and more. These demakes can only be used on PC. This is also true for Bloodborne PSX.

The Bloodborne demake will include the original game’s first zone and conclude after Father Gascoigne’s second boss fight. Everything in between will be available, including the fight against the Cleric Beast. It will run and play exactly like an old PlayStation and launch on January 31, 2022. You can keep up with Lilith’s updates via her Twitter page.

Advertisement
Have you ever wanted to play Bloodborne on your PlayStation 1? Now is your chance to experience Bloodborne on the PS1.