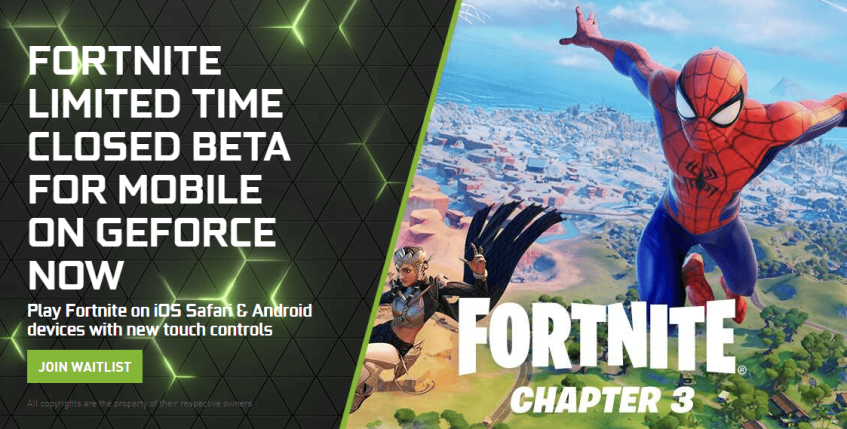 The new Fortnite mobile version is not just for iOS users. It also affects most iOS users since they have been unable to play Fortnite since May 2021.

iOS gamers have been unable to play Fortnite Battle Royale since it was removed from the App Store in the middle of a court case. For nearly a year, those without an alternative platform to the game had to close their accounts. NVIDIA announced that an iOS-friendly version would soon be available via the cloud. A closed beta will begin in January 2022.

What is GeForce NOW?

GeForce Now allows you to stream your entire library, or any free-to-play games, to all your compatible devices. GeForce Now subscriptions will enable you to stream your favorite PC games to any of your compatible devices, including your TV, Mac, Mac, or mobile device. This allows you to play your favorite PC games while you are on the move, at home, or away from home. On their official website, you can see which games GeForce Now supports.

Fortnite, one of the most loved free-to-play games, is now available on GeForce. However, the new touch-screen-enabled version will bring it to mobile devices. Epic Games and NVIDIA have been working together to create touch-screen compatibility on GeForce NOW. The game is still in development so that anyone can apply for the closed beta.

Fortnite mobile closed beta is open to both Android and iOS gamers. It will begin in January 2022. You can sign up now at NVidia.com.

You cannot be guaranteed admission by applying for the closed beta. There will be limited places. You do not need to have an NVIDIA account. However, you don’t need a GeForce NOW paid membership to participate.

Here’s a brief history of Epic Games and Apple

This announcement is more exciting than usual because iOS Fortnite players have been unable to play the Battle Royale since May 2021, when Epic Games and Apple were locked in a heated court battle. Despite a separate court case between Epic Games, Google, and others, Android users still have access to Fortnite mobile.

The court proceedings were about payment processes on the Apple App Store and the Google Play Store. Epic Games was, therefore, unable to sell V-Bucks in-game. Fortnite is free to play, so there’s no cost for it on the App Store. Epic Games then makes money through in-app purchases, which Apple disagrees with. Epic Games took issue with Apple’s 30% cut from App Store sales. This resulted in a loss for Epic Games or higher prices for Fortnite users. Epic Games lost the lawsuit, and an agreement could not be reached. Fortnite was removed from the App store and, consequently, iOS devices. Until now.