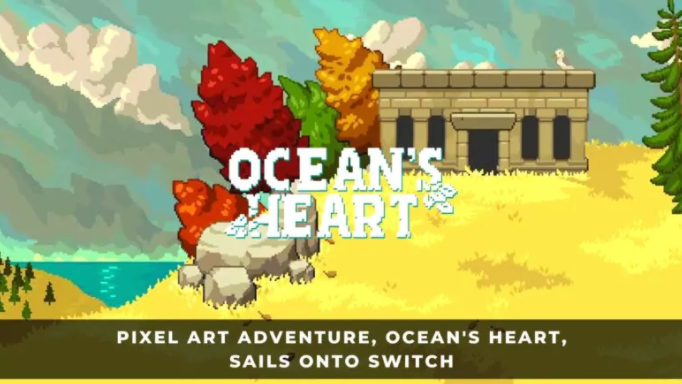 Developer Max Mraz and Nordcurrent have released a press release revealing an Ocean’s Heart Switch launch. On February 10, the pixel art adventure will be available on the hybrid console. The Nintendo Switch version will be available for $14.99 and a 310MB download. It is a game that is highly focused on exploration. According to the developer, it is heavily inspired by Nintendo’s Legend of Zelda series.

” Ocean’s Heart wears its influences on it, so I’m thrilled to see the game arrive on Nintendo Switch. Ocean’s Heart was a love letter for the Legend of Zelda, but it also has its own distinctiveness that makes it stand out. It is about exploration and the satisfaction that comes with solving a mystery. It lures you off the path with its hidden areas, which hint at stories and conceal new monsters or treasure. It’s gratifying to see my game on the platform that gave me the most significant inspiration after building Ocean’s Heart.

Tilia, a young girl, is entrapped in an unexpected adventure when Blackbeard kidnaps the father of her mother! Tilia must set off on an exciting new adventure as the ruthless pirate continues to keep her father’s goal a mystery. She will learn lore, gather materials, craft potions, and, of course, become more powerful as her quest continues. This is important as she will face deadly bosses in the dark depths of the many treacherous underground dungeons.

Ocean’s Heart, in addition to its Switch release, has also been available on Steam as well as gog. For more information, you can visit the official website.