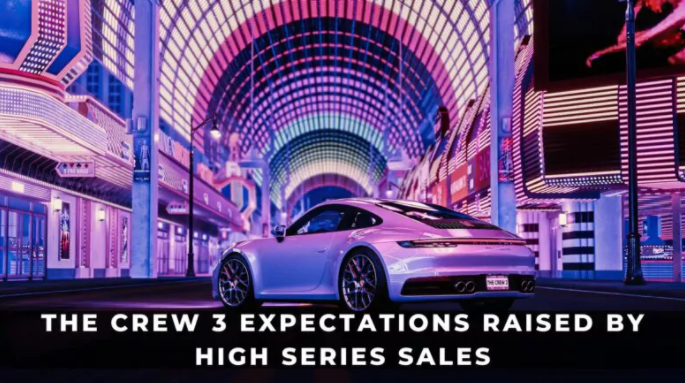 THE CREW 3 SALES EXPECTATIONS WERE RAISED BY HIGH SERIES SALES

The Crew 2 is almost four years old and has yet to achieve the same fame as Forza, Gran Turismo. However, it certainly generates more profit than you might think. Despite its flaws in physics, repetitive events, and massive grinding, it’s a unique genre. We expect Crew 3 sales to grow and that Crew 3 critics will be more optimistic than ever. Ubisoft presents 2021 to be a great year. They expect the following years to be successful but remain competitive.

TABLE OF CONTENTS1. Latest Sales Figures1.1. Expansions with more staff1.2. Past Figures and Response2) Rumours About The Crew

Crewfranchise continues its growth and is a valuable franchise for Ubisoft based on the latest figures. It was a unique concept that many racing fans loved, and it began in 2013. There is an enormous open world with cars for you to explore. It was a bit awkward due to its “insipid storytelling”, but the emphasis is on quantity and quality here. The map was re-released years later with smoother graphics and more content from The Crew 2. Although it was controversial to re-release the map, some fans were not happy with the decision. However, the game seemed to be a huge success.

Over 30 million players have enjoyed the Crew. These stats are impressive for a franchise with only two titles. This is despite the many complaints from players about the game’s shortcomings. The Crew2 is not at the top of the charts due to inaccuracies in physics and reused objects. However, freedom makes up for it. It has remained alive thanks to its release and regular updates.

The Contractor is the latest major DLC to the game. This allows you to become a taxi driver or limo driver and extract objects to a specific destination within a set time limit. Although the concept is straightforward, the challenges are still challenging. These updates, as well as the discount periods and free-to-play days, have attracted new players. The company is expanding due to its enormous growth and other Ubisoft games.

Ivory Tower is a Ubisoft subsidiary. However, the profit rise for the latter will indirectly affect The Crew developers, eventually expanding the studio. The studio started with a team of over 100 developers. The number of developers was increased to 100 by the time the second title hit the market. We expect Crew 3 to have more excellent quality and higher sales than ever before.

RESPONSE AND PAST FIGURES

Ivory tower reported that The Crew 1’s support had ended, and the game was being played by 5,000,000 unique players. These numbers were not increased further, and we are currently at thirty million players. This is a 600% increase in the franchise’s sales. We hope that The Crew3 sales figures can increase this number to four digits. It isn’t easy to achieve such high numbers. This does not mean that the series isn’t a strong competitor in the racing games industry.

The Crew’s crazy growth can be compared to some of the most popular racing games like Gran Turismo and Forza. Based on stats by VGChartz, it may outperform both. Gran Turismo, Forza and The Crew are both more established and sell more units in a shorter time. Although it’s a highly competitive market, The Crew has the highest growth rates.

RUMOURS ABOUT THE CREW 3

Let’s now get to the exciting bits about Crew 3… Or should it be Crew Orlando. Last year, The Crew2 was hacked by players who discovered suspicious files called The Crew Orlando. Orlando is beautiful, but putting a whole game in Orlando seems odd. This is especially true for a franchise known for its vast maps!

It is easy to assume that the name “Orlando”, a code name for the whole project, is just that. It’s not disclosing its exact name or location, but it does seem to be in a tropical area. Forza also named the McLaren Senna file ” CCL_Wellington_18″, likely for the same reason as not revealing classified information. Tom Henderson, a freelance writer for IGN, confirms that this part is part of the next game. It’s also supposed to have a reworked Physics engine, which is very encouraging to hear. It’s an image from the Orlando file.