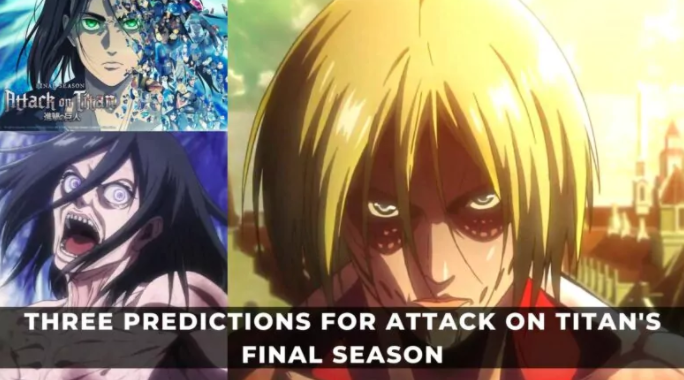 The end is near for one of the most critically acclaimed animes ever. Attack on Titan was the brilliant creation of author and illustrator Hajime Itayama. The animated series premiered in 2013 and has enjoyed a phenomenal run. These are the three predictions for Attack on Titan’s final seasons to celebrate this fantastic series.

Let’s start with the obvious. Annie is still not heard from since the beginning of season 1. This will change very soon. She is currently in a crystal shell she made. Maybe someone will require her. Although the Marleyans might need an additional titan, that would be too obvious. She could be required for an unexpected character. Perhaps she has some information to help the Indians, or someone needs the Female Titan’s power.

BLOOD IS BACK INTO PLAY

A few bloodlines have unique properties in Attack On Titan. The final season, and the first half thereof, provided many details about Eldians’ ability to become titans. There are also more supernatural abilities in some Eldian bloodlines.

Only royal blood can use the Founding Titan to control pure titans. Eren Yaeger currently holds the Founding Titan power. It cannot be used in current circumstances. Eren must have physical contact with someone of royal blood to use the control. This seems to be the season’s goal. Although Eren will eventually be able to harness the power of the Founding Titan’s founder, it is not clear what he will do with it. He will he follow Zeke’s plan or not? Or will he try to double-cross him. Only time will tell.

The Ackerman bloodline is another that hasn’t been explored much. Mikasa, and Captain Levi are the only known members. Ackermans have the same power as titans, but they are human. Eren claimed that the Ackermans were created to protect royal family members in the first half. However, it is possible that he was not being truthful. In the second half, the truth about the Ackermans is likely to be revealed.

The truth about TITANS will be revealed

The series is ending, so it makes sense that all the big questions can be answered. We will find out the true history of titans and the truth behind the legend about Ymir Fritz, the first Titan. Ymir Fritz could be the little girl who remade Zeke’s body in his vision.

Many fans want to know the answer to another question: Why do titans eat humans? They don’t need to, so it seems strange that they do. Maybe that is also due to Ymir Fritz.

Fans will soon find out if any one of these predictions for Attack On Titan’s final seasons come true.