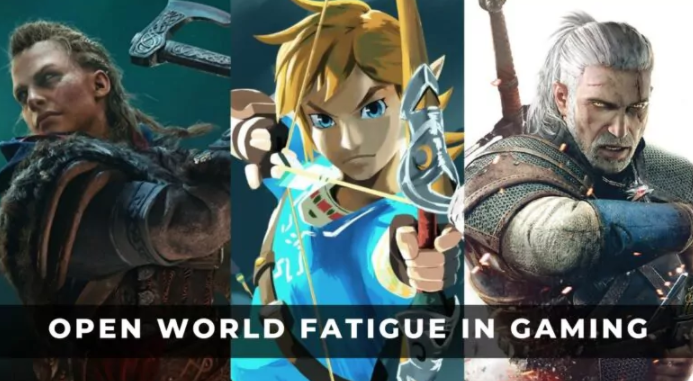 Recently, I decided to begin To The Witcher 3, The Wild Hunt, to have another go at the legend game. The game is an excellent open-world adventure. I rate it highly. However, despite my excitement at exploring the world again, I felt a sudden sense of dread. Just an hour into the White Orchard tutorial, I felt hesitation about continuing the experience. It was like I could see a path leading up to a mountain. Although it’s a path that I had walked before, this time, my heart wasn’t in the right place. That was when I realized I was suffering from a common problem for gamers. Open world fatigue is a common problem in gaming.

In this regard, I must immediately say that I am in a perfect place. I am blessed with plenty of gaming time. Gaming is something I genuinely enjoy and want to do. This is why I don’t think this obstacle should be a problem. My free time seems to be blurring, and I feel increasingly frustrated. It feels like each gaming session is almost identical. Feel like you’re on a treadmill.

Players with limited time will face a more complex problem due to time constraints. It is challenging to keep gamers committed to games that require 60 hours to complete the story. Take a look at Dying Light 2, which took 500 hours to complete. But, open-world fatigue is not the same thing as boredom. This has more to do with the accessibility of the genre than the appeal.

The abundance of RPGs is perhaps the most significant factor in increasing open-world fatigue. The typical design philosophy of big open worlds is the incorporation of RPG mechanics. This includes player builds that use stats and levelling up. It is common also to place a lot of emphasis on upgrading gear. This can lead to a tedious checklist that is necessary to keep the story going.

A rising trend is also the use of dialogue options. Although choosing what your character speaks is not a new trend in the genre, it’s growing more common. The game is bloated by this, as well as the large map. Every exchange is broken up into different branches of exposition. It often violates the show don’t tell rules. Games with a lot of dialogue options rarely have the luxury to animate every cutscene. Developers cut corners by using repurposed animations and simple framing. As a result, games become less cinematic and more tedious.

When I think of open-world fatigue in games, I think about how valued my time. It doesn’t matter if I have enough time. It doesn’t mean that I want it wasted. The biggest problem with open-world games is their design philosophy that they are mostly filler. While it’s OK to avoid filler, recent games have leaned into the grind. It is easier to make a game more engaging to increase player engagement. It’s easier to make a game longer to increase player engagement statistics.

For some open-world games, the RPG may be an unnecessary constraint.

This is a complex point. It is related to the gameplay of each game as well as the entire genre. The uncanny feeling of deja vu has caused me to have more difficulty getting invested in open-world games. This is normal with sequels. However, when new titles feel eerily familiar, it can be a sign that the genre is becoming tiresome.

Certain games are often described as Ubisoft-like. Use of mechanics like towers to reveal the map or collect items that litter the world. These are common in titles such as Assassin’s Creed and Far Cry. Ubisoft’s entire catalogue is experiencing this problem. Watch Dogs feels similar to the previously mentioned games. Immortals Fenix Rising is just Assassin’s Creed Odysseyassets re-used. It is becoming more tedious to go through the same experience repeatedly with a different paint job. This also affects the rest of the genre, with many titles taking cues from Ubisoft’s design philosophy.

Individual games are also affected by repetition. If a tutorial gives you all the experience, it signifies that something is wrong. Perhaps the most frustrating aspect of a game is the lack of meaningful progression as you gain more experience. Open world fatigue is a sign of poor game design. It is the idea that players will want to do the same thing repeatedly for 100 hours. This is the idea that the entire experience is so compelling that each moment doesn’t need to be unique.

This also reduces the replay value.

Quality can refer to many different aspects. Quality does not only refer to stability or buggy state of games but also their meaningful content. The quantity approach to games is becoming more common, a continuation of the previous point. It is not necessary to fill the map with copied-paste resources. The same buildings, same activities, same resources. All of this adds up to a very murky and undistinguishable experience.

It also applies to the state of the games. My first instinct when I hear about an open-world game is to think of bugs. This isn’t uncommon in any game. A few bugs are not something that would make me lose my mind. Open world fatigue is a growing problem in gaming due to the genre’s reputation for glitchy titles. For a modern example, take a look at Cyberpunk2077’s buggy Launch. It seems that these games are too large to ensure quality control.

The quality of the individual moments within the game is also important to me. I love it when a game takes unexpected turns. It’s when the gameplay suddenly changes or the cinematography is spectacular. A mission that is intense and involves shifting environments and intense action. It is exhausting to see open-world games refusing to be flexible in their mission design.

I prefer small, well-crafted moments to a long, boring ride.

It’s difficult to answer this question because it involves two sides of the battle. It’s not about what game developers should do. They must be bolder and take risks. Recognizing what worked in the past will make it less glamorous a second time. Perhaps some of the most popular elements in the genre are no longer relevant. Every title wants to be copied Breath Of The Wild or Assassin’s Creed. To start a new cycle of fresh trends, we need innovative ideas.

There is also the matter of how we play as gamers. Open world fatigue is something that gamers can easily overlook. It is inevitable that you will eventually become bored by endlessly playing the same games and replaying old favorites. Some open-world games can have an unhealthy, junk food-like quality. They satisfy a quick, urgent need to play. Although it isn’t as fulfilling as you might think, it is readily available. It is easy to find and requires little attention.

Recently, I played Mass Effect Legendary edition for the first time. It was a wonderful experience. Although I don’t have any nostalgia, it was refreshing to have a good story and an enjoyable experience. It was amazing to feel that the games were constantly bringing me new and memorable moments. It’s remarkable that I didn’t feel like my time was wasted, despite the length of the entire trilogy. It is a testimony to the power of standing as an individual for a game. To be unique, not derivative. This is made even more evident by Mass Effect andromeda failing in comparison to a modern open-world.