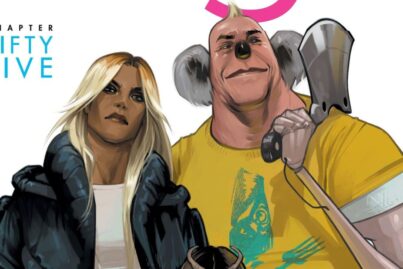 Saga #55 hit stands this week, bringing the acclaimed Image Comics series’ three-and-a-half-year hiatus to an end. Fiona Staples and Brian K. Vaughan, the writer and artist, justified this long break as a way to recharge their creative batteries. They immediately got back into their epic SciFi/fantasy story as nothing had happened. Saga #55 takes place three years after Saga #54. Marko, the fugitive, is long gone, Alana, the wife and fellow fugitive, has been reduced to smuggling to make ends meet, and Hazel, their rebellious 10-year old daughter. Saga #55 is devoted to reintroducing ourselves to these characters and the people they care about. It’s also when we get to know the intergalactic community, which is so determined to wipe out everyone.

Although it’s difficult to explain how comforting it is to be able to slip back into Saga’s fully realized make-believe world after such a long break, it’s a genuine feeling. Vaughan’s scripting is a big part of the reason, as is Staples’ unique blend of sketchy characters and painterly backgrounds. This has not lost any of its charms. It’s more than just the comfort of reuniting with fictional people who matter to you. We haven’t seen Alana or Hazel in three years. Yet, Saga #55 doesn’t reassure us. This space opera is not like other space operas. It’s not a story of good triumphing over evil or love conquering all. This is, instead, a comic book series that many feared would die a quiet death. It’s a survival story.

It’s not just literal. Saga #55 has plenty of this kind of stuff. Alana is doing all she can to care for Hazel and her adopted brother Squire; although we don’t see the immediate aftermath of Marko’s death, it’s evident that his murder is still a wound mother is trying to heal. Squire’s father also died, leaving the child mute since then. Saga #55, a portrait of a family struggling to survive, is about the centrality of family.

Saga #55, beyond the obvious, is a story about ideas surviving. This is something Vaughan & Staples highlight in the first panel of the first page. Ideas fighting for survival is a theme that runs through the entire series. It’s like Hazel running for her life in the first pages of this issue. Saga’s central metaphor is parenthood, which stands for artistic creation. However, we are constantly reminded that ideas, just like children, are fragile and need dedicated caregivers to bring them to life.

It’s not just the collaboration idea that Hazel represents. Peaceful co-existence between Marko’s warring factions is being tested in Saga #55. Saga, Vaughan’s, and Staples’ idea of a comic book series for mature readers about a family living in an unreal world are fighting for survival. Many things could go wrong in Saga’s run at this point, including creator burnout or audience apathy. This issue could have been the end of Saga. Vaughan, Staples and others are acutely aware of this, so it’s not surprising that the first pages of Saga #55 focus on a wild, brilliant idea, namely Hazel, which barely manages to outrace disaster.

Hazel escapes her terrible predicament because Vaughan & Staples believe that Hazel and the comic book series she now headlines are too great an idea to lose. Saga #55 also reminds us that not all good ideas can flourish by themselves. Marko put in a lot of effort over the 54 preceding issues to create a better version of himself. But, he ended up being the hollowed-out skull at the centre of Saga #55’s most brutal scene. Or they could die out. Ideas need to be supported, protected and even fought for. This is true in real life and Saga’s fictional world. It’s a fact that poses a threat to Saga #55, which was coming off a long break, as it does for the characters in its pages. This story could easily have been about survival, but it could quickly become one about extinction.

Early reviews and online buzz around Saga #55 indicate that Vaughan, Staples and others aren’t the only ones who will do whatever it takes for their idea to live on. Image Comics has not yet released official numbers, but it is expected that Saga #55 sales will be comparable to or exceed those of previous issues. Comic book readers have volunteered to support Vaughan & Staples in raising their indie comics baby. Most of them until the final instalment, Saga #108 drops.

Saga #55 is when they made a new commitment to do this. This, above all, makes this issue a story about survival and family.