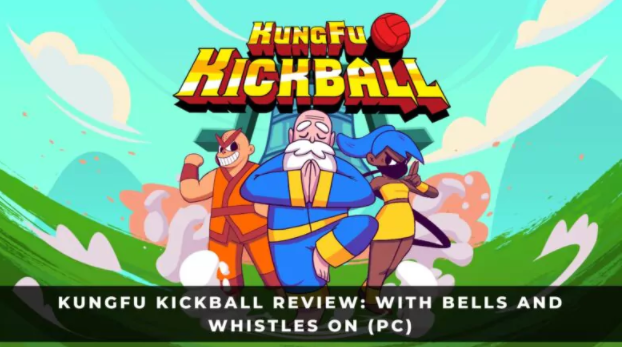 KungFu kickball is a fighting sport that WhaleFood Games recently developed and which I was delighted with. Another strong entry in the niche Rocket League lounges. KFK may seem ambitious, but it is far more than that. Fighting games and sports games are two completely different things. KFK does a great job of combining the two. Although it’s easy enough for anyone to do, there is a bit of nuance that encourages tactical thinking. It’s also enjoyable!

TABLE OF CONTENTS1 Gameplay – Everyone Was KungFu Fighting1.1) Arcade Mode- A Ringing Endorsement1.2) Characters Fighting to Understand2) Graphics, Audio – The Belle of The Ball

GAMEPLAY – EVERYBODY WAS KUNGFU FIGHTING!

KungFu kickball‘s goal is to use your martial art to hit the ball into the bell of your opponent, earning a point. The winner is the player who has scored the most points within the time limit. KFK acts a little like a 2-D fighting video game with a jump, hit, and teleport button. The regular fit is a punch. However, switching while moving the joystick in specific directions will alter the attack. If you push the joystick left or right, you can deliver a powerful kick that knocks down the ball and knocks your opponent to the ground.

Here is where tactical thinking comes in. Many maps have angular floors that create physical barriers between you, the bell, and the ground. Although a strong kick can move the ball farther across the field, it may end up moving it closer to your side if it hits it at an angle. This is where the teleport button, I mentioned earlier, comes in handy. After blinking a few feet, you can move the button again by touching the ground.

It’s a lot of fun once you get the rhythm of it. Predicting the ball’s bounce at that angle and then jumping into the air to kick it clear, teleporting backward just enough to knock the ball away from the opposing player. One time, I almost won a match by juggling and kicking the ball up repeatedly until it ran out. This is a combat sport. With a well-placed move, you can knock down your opponent. This gives you time to position yourself properly.

I can’t see anything wrong with KFK moment-to-moment gameplay. Without dipping too deeply into either one, it combines the competitive energy of sports games with the subtle nuances of fighters. It’s easy, it’s entertaining, and it all works together. There is one problem: nothing is really interesting or particularly exciting. KungFu kickball is a great game. But there’s nothing that makes it stand out.

Now, I am not a big fan of multiplayer games. It isn’t easy to find matches online because I don’t particularly appreciate playing games simultaneously like other people. KungFu kickball offers an arcade mode that allows you to play even if no one is online. This is where I spent most of my time, and it was a lot of fun. This also shows the game’s arenas and unlocks the three hidden characters for each difficulty. This is also where I encountered the most problems.

Arcade mode allows you to play through multiple matches. There are five matches for an apprentice, six for a teacher, and seven for a master. It would be nice if they could randomly assign the stages. Because you only have to go through each step once, I assume they didn’t. But that’s what’s the problem. Replayability provides the vitality for offline multiplayer content. It is also relatively easy to complete the apprentice difficulty. It’s a great challenge that is just frustrating enough to want to win it. Master, on the other side, feels like doing dentistry under the sun. It was difficult, risky for my health, and ultimately, unnecessary.

Next is the character design. The character designs are very appealing to me. They remind me of Dragon Ball or the Scott Pilgrim and The World comics. But I don’t know who they are. I don’t need to know their history or have complex motivations. Their passion for kickball and their martial arts background are enough. It would be nice to know their names. It would also be helpful to understand what makes them unique from other characters on the list.

There are seven characters total, and each one feels slightly different. Some feel faster; others think they hit harder, and some can take more hits. The problem is that the differences are way too subtle. This is not necessarily a bad thing. It balances the roster nicely, and it stops people from complaining about “character X being overpowered.” This game needs a glossary or a small stat table that pops up when you choose your kicker. They will all feel the same person, even though they are wearing different outfits. This is a wasteful way to create exciting characters.

Advertisement
KUNGFU KICKBALL REVIEW: WITH BELLS AND WHISTLES ON (PC)