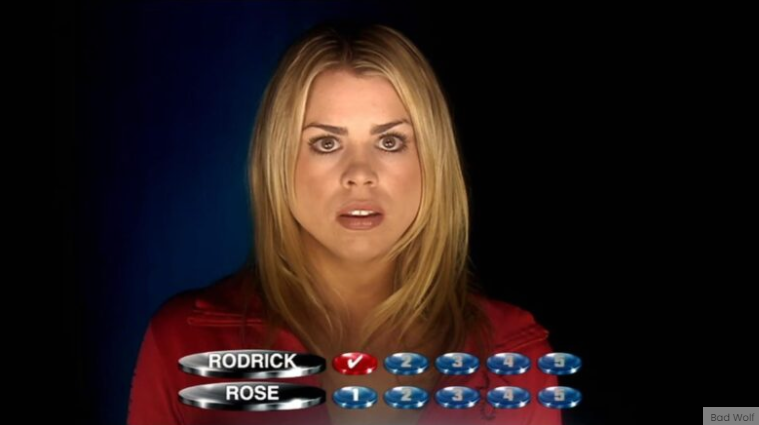 Re-watching Bad Wolf gave me so many notes that I don’t know where to start when talking about it. The Season 1 finale is one of my favorite episodes of New Who. It has so many storylines and so many characters. Many seeds that were planted in the last eleven episodes are now flowering. Russell T Davies is an exemplary example of his ability to plan and keep the reins in check. Bad Wolf/The Parting Of Ways shows that he is still a man who has a plan.

Okay, let’s get started. Let’s start with a quick overview of the episode. The Doctor awakens in Big Brother’s house. Davina McCall’s music sets the scene. It would have been immediately recognizable to anyone who saw it in 2005. Children watching Doctor Who for the first time will miss the disorienting cognitive dissonance when the music begins playing.

We soon discover that the Doctor is in the house and that Rose (and Jack) are not on the station. Rose is in The Weakest Link With the Anne Droid (the best joke in the Season, except when Cassandra plays Toxic via the jukebox), and Jack with Trinny, Susannah, and Susannah robots. This is another reference that kids will never know about. Soon, they discover that the games can be deadly and are being controlled by an unknown force. Rose soon disintegrates, and Jack and the Doctor make it to the control rooms. Rose then becomes alive. She’s also aboard a Dalek vessel because the Daleks control the games, in a twist new in Season s.

This finale is an excellent example of RTD in action. This episode is so closely tied to The LONG Game (the worst outbreak in the Season, that Bad Wolf has a recap. Who would have thought that an episode like this could be the beginning of the finale? It all started from humble beginnings, I suppose.

The Long Game saw the Doctor close down Satellite One and cut off the rolling news channels broadcasting on Planet Earth non-stop. He then skipped away, and we now see the direct effects of that in Bad Wolf. After completing his work, the Doctor never returns to the same place. He is always moving on and solving new problems. Here, however, he must face the consequences of his actions. This is the world he created 100 years ago. He is shocked by it.

Nine has learned a lot since the Time War. As his friends, we’ve seen him go through each one and see him grow as a person. It is fascinating to see him realize that this is his fault. Lynda-With A-Y explains Earth’s current state. As evident in the Time War’s explosive finale, this was all because of him. This would have been a resounding slap for the Nine, who was present earlier in the Season. He may have even fled. He doesn’t do this now. He cares more for people. He immediately likes Lynda With-A-Y and is interested in what she says. The episode ends with the Daleks appearing. Christopher Eccleston does an excellent job as the Doctor experiencesgenuinee fear and then hits the ground running.

Side note: If we are praising RTD for his writing, I would like to comment on the magical ability he has to create instantly relatable characters. Lynda-With A-Y is a minor character in Doctor Who’s the grand scheme. We care deeply about Lynda-With-A-Y in this episode. RTD is a master at sketching. He makes the sketches real by carefully choosing the details, such as Lynda being Lynda with a Y instead of an I. This is a skill that not every writer can master.

Before we get to The Parting Of Ways and I get all emotional about it, I also want to make a quick comment on Nine, Captain Jack, and their relationship. I completely forgot how wonderful they are together. I can understand Jack’s desire to see the Doctor again and why Ten will end up being such a disappointment. Nine and Jack work well together; sometimes,s it seems like they read each other’s minds. Jack iscompetente and can trust him to complete any task the Doctor asks. Jack is emotional and the sun to the Doctor’s moon. When Rose is killed, the Doctor is silent, but Jack is shouting in the background, so full rage. This editing suggests that Jack is the Doctor’s inner voice, unrestrained.Therefore, it makes sense, that they will part ways at the end. They are too powerful together; it would be impossible to solve their problems. Nine and Jack are, in my opinion, one of New Who’smost excellentt partnerships. They – at the chance of going back to Classic Who to compare – remind me of Ian and the First Doctor, but less antagonistic.